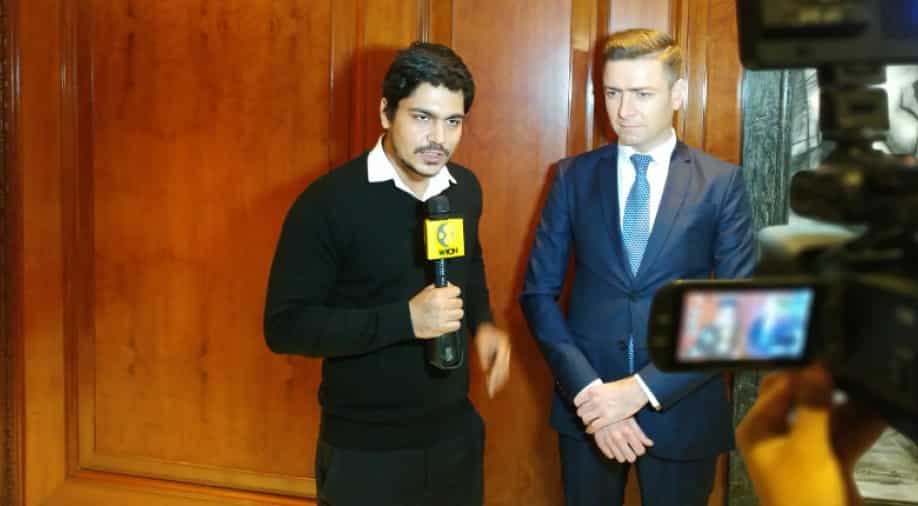 In fact, his name Laimonas means "Laxman", the FS informed. Both languages have approximately 1,500 common words, despite miles of difference between Lithuania in north Europe and India in South Asia. Here is the full interview.

WION: Can you speak in Hindi, something everyone wants to hear in India?

WION: What is the key reason you learnt Hindi?

Laimonas Talat Kelpsa: We need to give credit that Hindi is one of the most widely spoken languages in the world. One billion people have Hindi as their official and native language and looking into the future, we have to accept this fact and learn in advance for the world which is coming. Another reason is that Lithuanian and Hindi have a close connection. Both our languages originate from Sanskrit. We have words that sound identical.

WION: What are the common words between Hindi & Lithuania...if you give an example?

Laimonas Talat Kelpsa: We can make comparisons. In Hindi we have Vayu, in Lithuanian we have Vayas. Deva in Hindi, we say Devas. Agni in Hindi, we say ugnis for fire. Shakha means branch of a bank which means the same in Hindi and Lithuanian. Every layer of society from the human body to students to religion to the social aspect, you will find common sounding words.

WION: So how did the common connect happen? You are in northern Europe and we here in South Asia...

Laimonas Talat Kelpsa: Why is that so, its a mystery. Linguistic are building theories and trying to verify them. It is how the connection happened. The research is on for the last two hundred years.

Probably, our forefathers at some point lived in the same territory, part of them migrated south to India, other part migrated north to Lithuania. Realy unique, our language has remained rather intact and have connections which are recognisable.

French researchers have said, if you want to learn how Indian people speak, how Sanskrit is spoken, you go to a Lithuanian village and see how a peasant speaks.

WION: How do you see ties between both countries?

Laimonas Talat Kelpsa: We believe India is playing an increasingly important role. Lithuania, which is a member of NATO and EU, we understand we need to redefine our ties with countries in Asia including India.

From this perspective, we have a good starting point, no recognizable differences, we have so many similarities we share. The linguistic similarity is one thing, we have historical connect as well.

The first Lithuanian visited India 400 years ago and we would be soon celebrating the occasion. Our independence movement 30 years ago was inspired by the ideals of Mahatma Gandhi, so we believe, we have a huge potential.