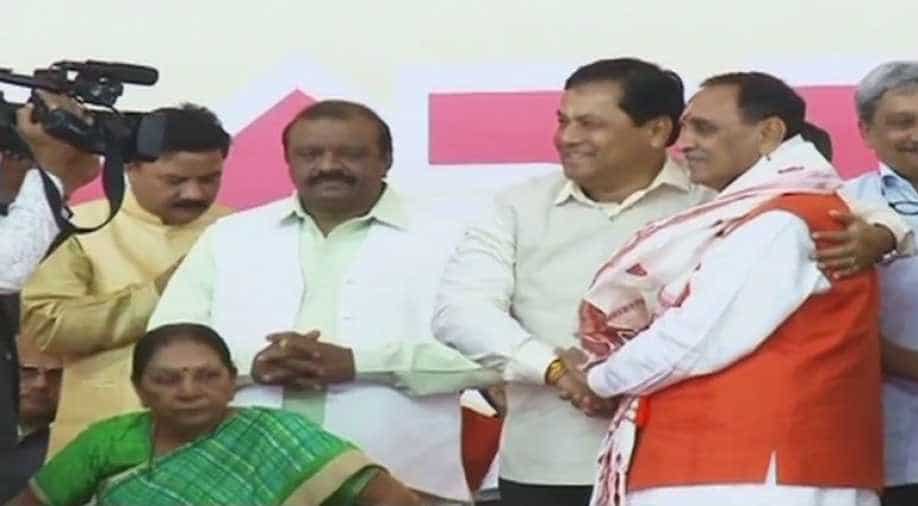 Vijay Rupani took oath as the chief minister of Gujarat today along with 19 ministers in the presence of Prime Minister Narendra Modi and a galaxy of senior BJP leaders. This is the sixth time that the BJP has formed its government in the state. With 99 MLAs, the BJP has a simple majority in the 182-member Assembly, 16 less than its 2012 tally of 115.

In a show strength, several Union ministers and senior leaders of the party were also invited for the ceremony, besides saints and religious leaders of different faiths.

The caste breakup of the ministry shows that the BJP is trying to woo the Patidar community. There are six Patel leaders in the 20-member Gujarat government, six from the OBCs, two Rajputs, three tribal leaders and one from Brahmin, Dalit and Jain community.

Here's the list of Cabinet ministers who are a part of the Rupani-led government this time:

Nitin Patel: He took oath as the Deputy Chief Minister for a second consecutive time. He retained his Patidar-dominated Mehsana seat, defeating his Congress rival Jivabhai Patel. Patel has been in the BJP for the past 30 years.

Ranchhodbhai Chanabhai Faldu: Former chief of Gujarat unit of the BJP, Faldu took oath as a Cabinet minister today. He is a Member of Legislative assembly from Kalavad constituency and belongs to the Leuva Patel community.

Saurabh Patel: Five-time MLA, Patel won the assembly election from Akota and is an MBA from US.

Bhupendrasinh Chudasama: He is the sitting education minister. Chudasma took oath as a Cabinet minister today.

Ganpat Vasava: He is a senior tribal leader who took oath as Cabinet minister today.

Kaushik Patel: He won the assembly election from BJP president Amit Shah's Narainpur seat. Patel took oath today as a Cabinet minister. This will be his first stint as a minister in Gujarat.

Ishwarbhai Parmar: He is an MLA from Bardoli.

And here are the Ministers of State who joined the Rupani government:

Vibhaben Dave: The only woman to be sworn-in as Gujarat minister. She belongs to the Saurashtra region and is a three-time MLA. He belongs to th Brahmin community.

Pradeepsinh Jadeja: Face of Kshatriya community, Jadeja is among the leaders trusted by both PM Modi and Amit Shah.

Parbatbhai Patel: Big face of Chaudhry-Patel community, the 69-year0old has previous experience as a minister in Gujarat.

Vasanbhai Ahir: He is the face of the BJP in Gujarat's Kutch region and is expected to play a key role in Gujarat politics.

Kishor Kanani: 55-year-old Kanani has won elections twice in the past. He belongs to Surat.

Purushottam Solanki: He is a famous leader of the Koli community and has vast political experience.

Ishwarsinh Patel: He is very close to BJP chief Amit Shah and face of the Koli Patel community. Patel holds an LLB degree.

Bachchubhia Khabad: The tribal leader has been roped in because of his tight grip on the community.

Jaydrathsinh Parmar: 53-year-old Parmar is a senior leader of the BJP and face of the Kshatriya community.