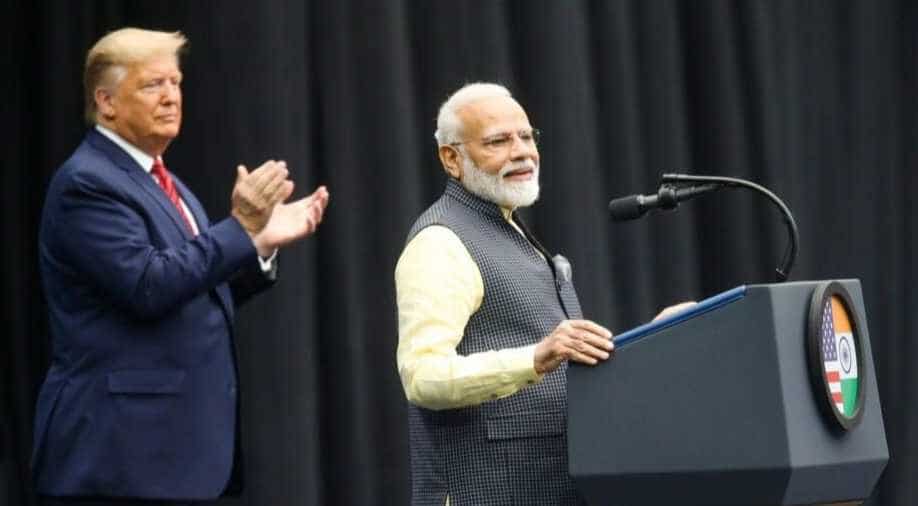 Reassuring the Indian-American community, PM Modi charmed the audience of 50,000 Indian-Americans saying 'everything is fine' in almost eight languages.

Prime Minister Narendra Modi on Sunday addressed the Indian diaspora in Houston's "Howdy, Modi" event in the presence of US President Trump.

Reassuring the Indian-American community, PM Modi charmed the audience of 50,000 Indian-Americans saying, "everything is fine" in almost eight languages.

"Because you've asked 'Howdy Modi!', my response is everything is fine in India," PM Modi said, continuing to reiterate the sentiment in about eight different languages including Punjabi, Gujarati and Bengali, to name a few.

Often hailed as a people's leader, PM Modi spoke about various issues including sanitation, data affordability, ease of business and highlighted the progress made during his tenure.

"In the last five years, we have bid farewell to 1,500 archaic laws," PM Modi told the crowd at Houston.

"We are also challenging corruption and giving it a farewell," he added.

The Prime Minister said India was striving to become a 5 trillion dollar economy and the government was laying thrust on boosting infrastructure, investment and exports.

PM Modi also said, on the second October when the country will celebrate the 150th birth anniversary of Mahatma Gandhi, India will bid farewell to open defecation.

On data affordability, PM Modi said, "Data is the new gold... the focus of industry 4.0 is totally on data. It is India where data prices are the cheapest in the world and 1 GB data is available for 20-30 cents."

The Indian prime minister informed the Indian-Americans present at the NRG event that visa and passport services have become easier.

On tax returns, PM Modi said it used to be "big headache earlier, now things are much easier."

"Online registrations have jumped manifolds. Just in one day, 50 Lakh tax returns were filed, more than the population of Houston."

Referring to the Central government's decision to revoke the provision under Article 370 PM Modi said, "India gave a farewell to Article 370," adding that it "denied Kashmiris their rights."

Addressing the audience of nearly 50,000 Indian-Americans, PM Modi asked people to give a standing ovation to Indian parliamentarians for their nod to repeal Article 370.

Referring to abrogation of Article 370, PM Modi also took a jibe at Pakistan, saying "the work done by India is bothering some people who are not able to handle their own country. They do not want peace."

"These are the same people who shield terrorism and nurture it. The whole world knows them very well," PM Modi added.