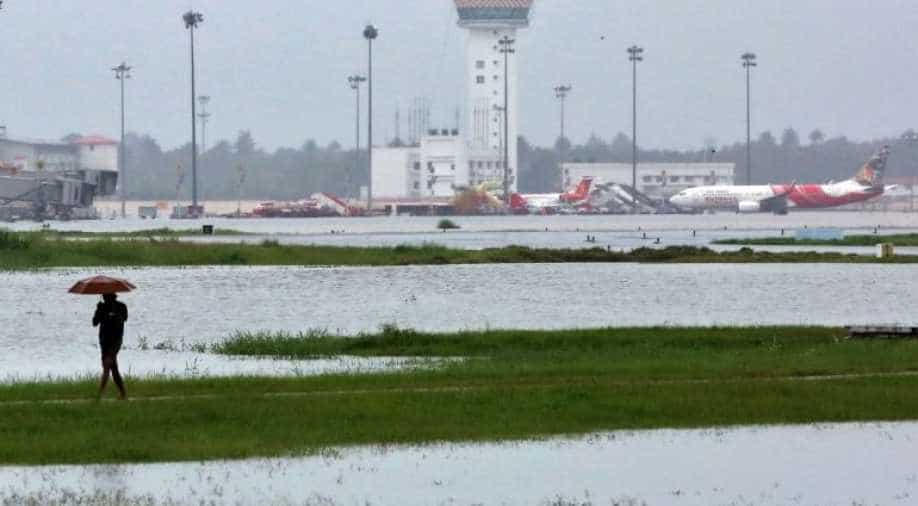 A man walks inside the flooded Cochin international airport after the opening of Idamalayar, Cheruthoni and Mullaperiyar dam shutters following heavy rain, on the outskirts of Kochi. Photograph:( Reuters )

Cochin airport was previously shut till August 18 but was later announced to resume operations on August 26.

Cochin International Airport (CIAL) will now resume operations on August 29. The decision came in the wake of concerns expressed by stakeholders of airlines and ground staff, news agency ANI reported.

According to reports, nearly 90 per cent of ground staff of various airlines, as well as those at the CIAL, has been affected by the floods. The authorities have therefore decided to suspend the operations at the airport for three more days.

Cochin airport was previously shut till August 18 but was later announced to resume operations on August 26 in the wake of heavy rainfall and floods.

Meanwhile, floodwaters across Kerala have been receding as there was a let up in heavy rains Monday onwards.

Teams involved in rescue and relief mission have been directed to focus on rehabilitation. The Indian Navy was also reported to have scaled down its operations on Tuesday.

In view of concern expressed by stakeholders of airlines & ground staff that 90% of their staffers got affected by the flood, CIAL(Cochin International Airport limited) has decided to extend the date of resuming operations for 3 more days, operations will start on 29 Aug: CIAL pic.twitter.com/7xXq9Sny2S

State authorities are ensuring regular supply of essential medicines in the wake of a possible outbreak of diseases.

As many as 373 people have lost lives in the destructive deluge that took a disastrous turn earlier this month.

State authorities have estimated a cumulative loss worth over Rs 21,000 crore in the catastrophe that was announced as 'calamity of severe nature' by the central government.

Nearly 10 lakh people in Kerala have been displaced and homeless, currently taking shelter in over 5,000 relief camps across the state, waiting for rehabilitating and normalcy.