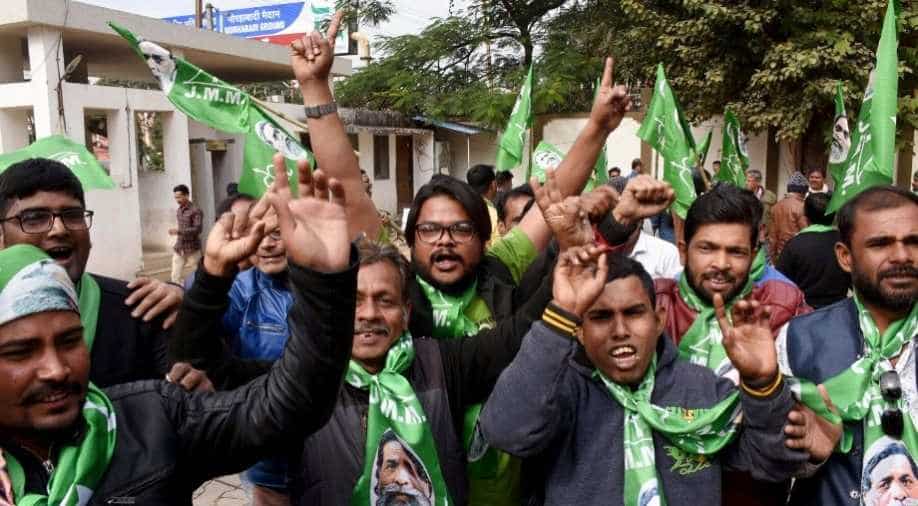 The ruling BJP appears to be sliding in numbers compared to earlier trends and was leading on 24 seats. It has won one seat.

The alliance of JMM, Congress, and RJD appears poised to form government in Jharkhand with the three parties slated to cross the majority mark of 41 in the state assembly, according to trends of results at 4 pm.

The ruling BJP appears to be sliding in numbers compared to earlier trends and was leading on 24 seats. It has won one seat.

Jharkhand Mukti Morcha put up a strong performance and was leading in 28 seats. Congress was leading on 14 seats and RJD in four.

The three parties are together leading in 46 seats in the 81-member assembly.

The BJP, which was in power in the state in alliance with AJSU, fought the elections on its own.

Chief Minister Raghubar Das was trailing from his traditional Jamshedpur East seat behind party rebel Saryu Rai by over 7500 votes.

Jharkhand Vikas Morcha (Prajatantrik) and AJSU were leading on three seats each, Communist Party of India (Marxist-Leninist) (Liberation) and NCP were ahead on one seat each and independents on two.

The state had a five-phased assembly election which concluded on December 20.

Congress leaders expressed confidence that the pre-poll alliance of the party will come to power.

"I have full faith that the alliance of Congress, JMM, and other parties will come to power in Jharkhand," Congress leader Ghulam Nabi Azad told the media persons in New Delhi.

The counting of votes began at 8 am today in all the 24 district headquarters amid tight security.