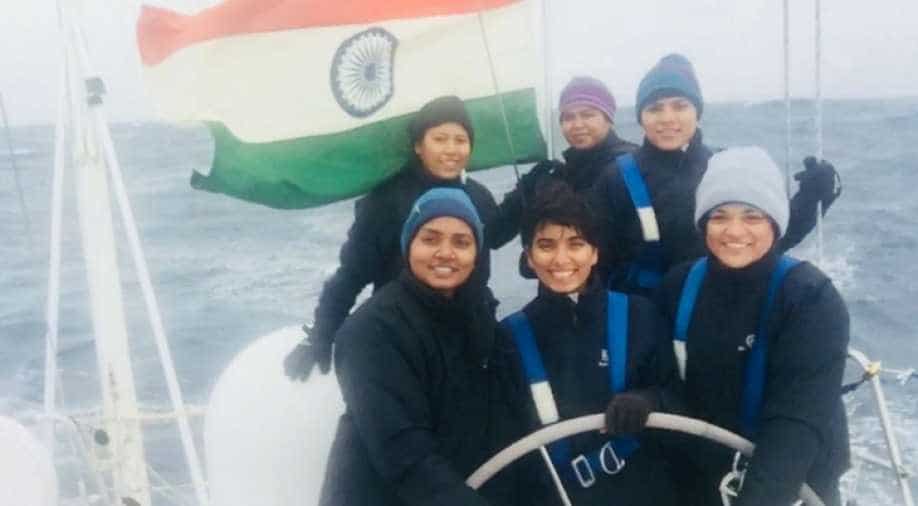 As per the Twitter handle of the Indian Navy, the sea was 'rough' and the winds were 'strong gusting to ~70kmph.' The vessel will return to Goa in April 2018. Photograph:( Twitter )

The six-member all-women crew hoisted the Indian flag to mark their achievement. The team had earlier started their journey from Goa in September last year.

The tri-colour hoisted with great pride & josh onboard #INSVTarini as she crossed the Cape Horn (designated point by Lat/Long): Indian Navy pic.twitter.com/sKr8yGxgq3

Wonderful news! Delighted that INSV Tarini has rounded Cape Horn in the last few hours. We are extremely proud of their accomplishments. pic.twitter.com/edmCvfecDN

As per the Twitter handle of the Indian Navy, the sea was "rough" and the winds were "strong gusting to 70kmph."

The women crew was trained in the Ocean Sailing Node at Goa.

Good weather with Sea not so bad, #INSVTarini crew made the best of the opportunity.... Culinary skills at their best.....Deep fried Vadas pic.twitter.com/APu5xzjqHj

INSV Tarini is a 56-foot sailing vessel, which was inducted into the Indian Navy earlier this year and showcases the 'Make in India' initiative on the International forum.

The expedition, titled 'Navika Sagar Parikrama', is in consonance with the national policy to empower women to attain their full potential.

It further aims to showcase 'Nari Shakti' on the world platform and help revolutionalise the societal mindset towards women in India by raising the visibility of their participation in the challenging environment.

The vessel will return to Goa in April 2018.