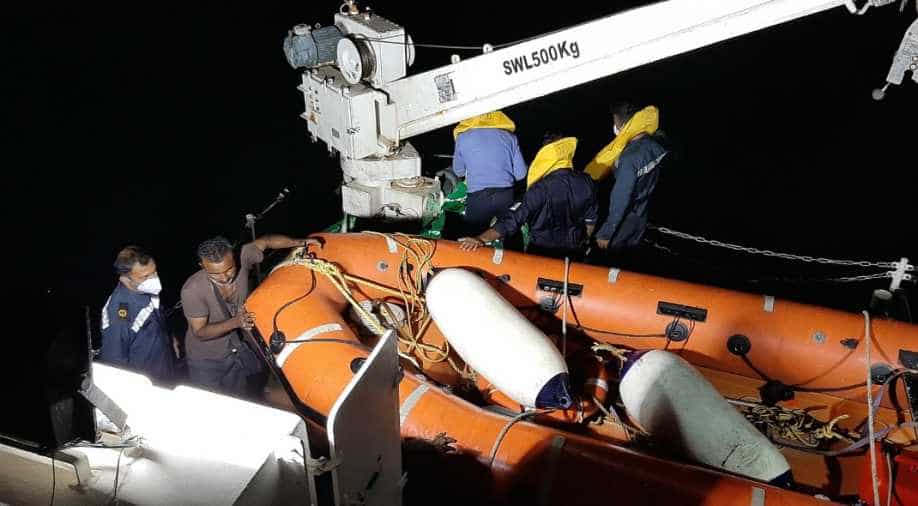 All 12 rescued crew were brought to okha and are safe. Photograph:( WION )

Around 9 pm on Saturday, the Coast Guard received information that there was flooding onboard the vessel 'MSV Krishna Sudama' around 10 nautical miles off the Okha coast.

The Indian Coast Guard rescued 12 crew of MSV Krishna Sudama, a cargo vessel sinking in the Arabian Sea off the Gujarat coast, officials said on Sunday.

The Coast Guard received information on Saturday at 9 PM that there was flooding onboard the vessel 'MSV Krishna Sudama' around 10 nautical miles off the Okha coast.

MSV Krishna Sudama had sailed from Mundra on the morning of Saturday (September 26) and was proceeding to Djibouti, carrying 905 ton cargo consisting of rice and sugar.

"Search and rescue was immediately commenced wherein Coast Guard Ship C-411 sailed from Okha, C-161 was diverted from off Mundra, and MV Southern Robin in the vicinity of the area was diverted to render assistance," it said.

The Coast Guard ship C-411 arrived near the vessel in distress.

It undertook extensive search in the area and located the craft carrying 12 crew members who had abandoned the vessel as it was sinking due to flooding, it said.

"They were brought to Okha and are safe," the statement said.

The area where the incident took place is being monitored by the Coast Guard Ship C-161 so that it can combat any probable oil pollution incident that might result from leakage of fuel from the sunken dhow, it added.