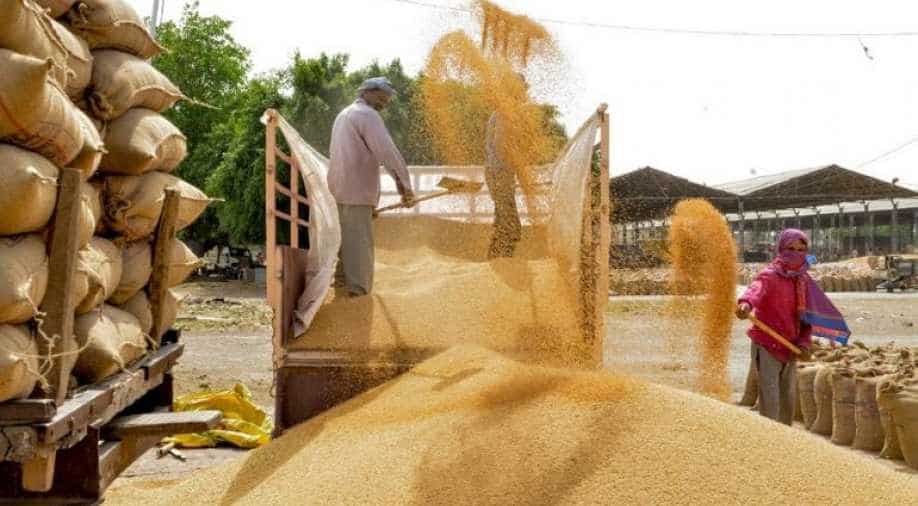 Indian labourers unload wheat grain from a trailer at a local distribution point on the outskirts of Amritsar Photograph:( AFP )

The Ministry of External Affairs has said that India will supply wheat consignments to Afghanistan through Pakistan in beginning of February.

“Pakistan has allowed the transportation of Indian Wheat assistance for Afghanistan on humanitarian grounds on exceptional basis. We have conveyed to the Indian side the necessary details of arrangements put in place by Pakistan and for about three weeks now, we are awaiting further response from India regarding the date of dispatch and other information of the first consignment,” spokesperson of Pakistan’s foreign ministry said.

The two countries have agreed to join hands at a time when Afghanistan is in desperate need of international aid ever since the Taliban regime took over in August this year.

Western sanctions aimed at the Taliban also prevented the passage of basic supplies of food and medicine, although this has since eased after exemptions were passed by the UN Security Council and Washington in December.

According to the UN estimates, nearly 23 million Afghans are facing acute food shortage, with as many as 3.2 million children at the risk of malnutrition.

The UNDP has warned that 97 per cent of Afghans would slip below the poverty line by June next year if steps are not taken.

“We have committed to supplying 50,000 tonnes of wheat as well as lifesaving medicines as humanitarian assistance to Afghanistan. We are in discussions with Pakistani authorities on the exact modalities of shipment of wheat. We remain committed to providing humanitarian assistance to the people of Afghanistan,” MEA spokesperson Arindam Bagchi said.

Last month, India sent 1.6 metric tonnes of medicine to Afghanistan via Kam airway, the first such consignment under the Taliban regime.

Abdul Qahar Balkhi, spokesperson of the Taliban foreign ministry, had praised the assistance and said, "We appreciate the arrival of two tonnes of Indian-assisted medicine to Indira Gandhi Children's Hospital in Kabul."

The abrupt withdrawal of foreign aid following the hasty exit of American forces and the Taliban's stunning victory last August left Afghanistan's economy on the brink of collapse.