Should identify states that 'support and finance' terror, Sushma says in veiled attack on Pak 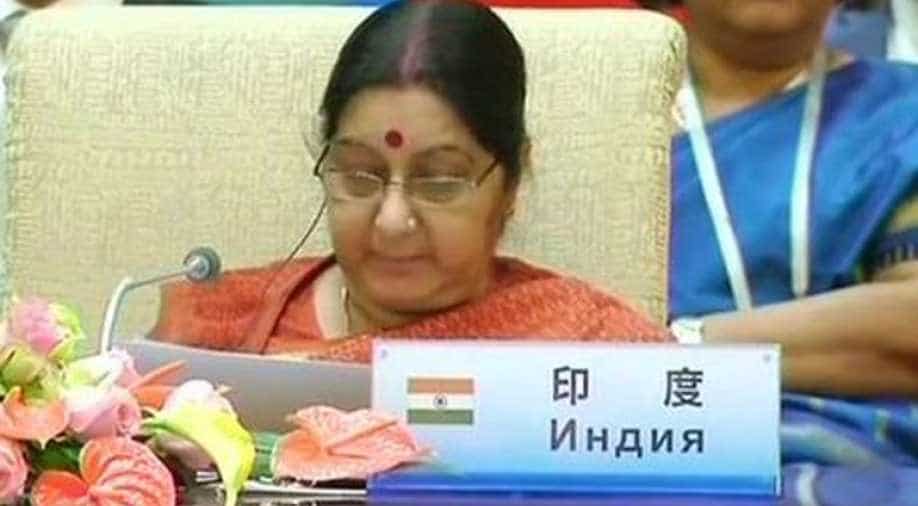 In a veiled attack on Pakistan, India on Tuesday said that terrorism is an enemy of the basic human rights and the fight against it should also identify states that "encourage, support and finance" the menace and "provide sanctuary" to terror groups.

There are a number of challenges that are being faced by the world today, foremost being the threat of global terrorism and the imminent need to build a strong security architecture to combat it, the minister said.

"Terrorism is an enemy of the basic human rights: of life, peace and prosperity," Swaraj said.

The criminal terrorist militias are not impeded by borders as they seek to destroy the architecture of international stability and build walls of fear in societies that believe in pluralism, she said."We strongly believe that our fight against terrorism should not only seek to eliminate terrorists but should also identify and take strong measures against States that encourage, support and finance terrorism and provide sanctuary to terrorists and terror groups," Swaraj said without mentioning any country.

Maiming and killing innocent lives indiscriminately constitutes the most blatant violation of human rights, she said.

"We have to work together to wipe-out this scourge from the face of the earth. In order to realise this objective, we must unite across our differences, strengthen our resolve and script an effective strategy against terror. We welcome the clarity shown by the SCO on terrorism from its inception.

"We should also urgently resolve to establish Comprehensive Convention on International Terrorism that India proposed more than two decades ago in the United Nations. We are determined to consistently strengthen cooperation within the SCO framework for comprehensive, cooperative and sustainable security," the minister said.

On trade and investment, Swaraj said that "protectionism in all its forms should be rejected and efforts should be made to discipline measures that constitute barriers to trade".

The meeting was also attended by foreign ministers Wang Yi of China, Kairat Abdrakhmanov of Kazakhstan, Abdyldaev Erlan Bekeshovich of Kyrgyzstan, Sergey Lavrov of Russia, Sirodjidin Muhridinovich Aslov of Tajikistan, Abdulaziz Khafizovich Kamilov of Uzbekistan, and Secretary General of the SCO Rashid Alimov among others.

Swaraj also raised the issue of reforms at the UN Security Council and said "it is clear to many of us that the Security Council is increasingly unable, or sometimes unwilling, to respond to the security challenges of our times, with tragic consequences.

For long India has been calling for the reform of the UN Security Council, the world body's top organ.

"We must not lose sight of the fact that reforms of the UN will be incomplete, without reforms in the Security Council to make it more representative of contemporary realities".

"Since 2008, the international community has carefully nurtured the ongoing Inter Governmental Negotiations at the UN to take our discussions on UNSC reforms forward," she said.

An overwhelming majority of members have expressed their desire to see these negotiations continue on the basis of a text, Swaraj said.

India is committed to the UN Framework Convention on Climate Change and its Paris Agreement of 2015 on combating climate change. Addressing Climate Change and promoting secure, affordable and sustainable clean energy are India's shared priorities, she said.

Following the establishment of "International Solar Alliance" in December 2017, Prime Minister Narendra Modi hosted its Founding Conference in New Delhi in March 2018, during which the "Delhi Solar Agenda" was adopted, she said.

"We want connectivity to pave the way for cooperation and trust between our societies. For this, respect for sovereignty is essential. Inclusivity, transparency and sustainability are imperative. India has cooperated extensively with international community for enhanced connectivity.

"This is evident from our involvement with the International North-South Transport Corridor, the Chabahar Port Development, the Ashgabat Agreement, India-Myanmar-Thailand Highway Project and Bangladesh-Butan-India-Nepal Initiative among others," Swaraj said.

"I believe that peace and development in Afghanistan contributes to security and prosperity of the member states and the region as a whole. This can only be achieved through political dialogue and reconciliation in an atmosphere free from terror and violence, within the framework of Afghan Constitution.

"We must strongly support the active efforts of the Afghan Government to implement Afghan-led, Afghan-owned and Afghan-controlled inclusive peace and reconciliation process. India actively supports the activation of the SCO-Afghanistan Contact Group, the Moscow Consultation Format and other mechanisms of dialogue and cooperation for restoration of peace and development in Afghanistan," the minister added.