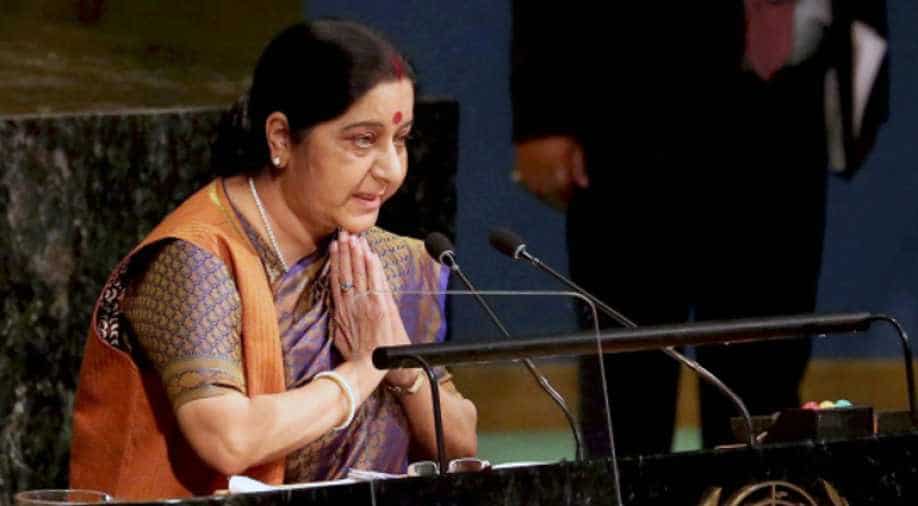 Hitting out at Pakistan for creating terror groups like LeT, JeM, and Hizbul Mujahideen, India asked Pakistani leaders to introspect as to why their country is infamous as the 'pre-eminent export factory for terror'

Hitting out at Pakistan for creating terror groups like LeT, JeM, Hizbul Mujahideen and the Haqqani Network, India today asked Pakistani leaders to introspect as to why their country is infamous as the "pre-eminent export factory for terror".

In her hard-hitting speech, Swaraj accused Pakistan of waging a war against India and said a country that has been the world's greatest exporter of havoc, death and inhumanity became a champion of hypocrisy by preaching about humanity from this podium. (Also Read: What Pakistan has to say about Sushma Swaraj's UN speech)

"I would like today to tell Pakistan's politicians just this much, that perhaps the wisest thing they could do is to look within. India and Pakistan became free within hours of each other. Why is it that today India is a recognised IT superpower in the world, and Pakistan is recognised only as the pre-eminent export factory for terror?" Swaraj asked.

India had ripped into Pakistan yesterday, describing it as "terroristan" and a land of "pure terror" that hosts a flourishing industry to produce and export global terrorism.

Speaking in Hindi for the second consecutive year at the annual UNGA session, Swaraj said India has risen despite being the principal destination of Pakistan's nefarious export of terrorism.

"We established scientific and technical institutions which are the pride of the world. But what has Pakistan offered to the world and indeed to its own people apart from terrorism?" she said, referring to the institutions such as IITs, IIMs and AIIMS.

What have you produced? You have produced terrorists...you have created terrorist camps, you have created Lashkar-e- Taiba, Jaish-e-Mohammed, Hizbul Mujahideen and Haqqani network," she said, adding that doctors save people from death; terrorists send them to death.

Swaraj said that if Pakistan had spent on its development what it has spent on developing terror, both Pakistan and the world would be safer and better-off today.

The minister said the terrorist groups created by Pakistan is not only harming India, but also hurting its neighbours - Afghanistan and Bangladesh - as well.

She said that for the first time in the UN history, Pakistan sought right to reply (RoR) for one nation and then it had to simultaneously respond to three nations.

"Doesn't it reflect your nefarious designs," she asked.

Referring to Prime Minister Abbasi's speech, Swaraj said that the Pakistani leader "wasted" too much of his time in making accusations against India.

"Those listening had only one observation: 'Look who's talking!' A country that has been the world's greatest exporter of havoc, death and inhumanity became a champion of hypocrisy by preaching about humanity from this podium," Swaraj said.

Commenting on Abbasi's claim that Pakistan's founder M A Jinnah had bequeathed a foreign policy based on peace and friendship, she said while it remains open to question whether Jinnah actually advocated such principles, what is beyond doubt is that Prime Minister Narendra Modi has offered the hand of peace and friendship since he assumed office.

"Pakistan's Prime Minister must answer why his nation spurned this offer," she said.

Noting that Abbasi spoke of a "Comprehensive Dialogue" between the two countries, Swaraj reminded him that on December 9, 2015, when she was in Islamabad for the Heart of Asia conference, a decision was made by then Prime Minister Nawaz Sharif that dialogue between India and Pakistan should be renewed and named it a "Comprehensive Bilateral Dialogue".

"The word 'bilateral' was used consciously to remove any confusion or doubt about the fact that the proposed talks would be between our two nations and only between our two nations, without any third-party present. And he must answer why that proposal withered, because Pakistan is responsible for the aborting that peace process," Swaraj said.

On old UN resolutions mentioned by Abbasi, Swaraj said that his memory has conveniently failed him where it matters.

"He has forgotten that under the Shimla Agreement and the Lahore Declaration India and Pakistan resolved that they would settle all outstanding issues bilaterally. The reality is that Pakistan s politicians remember everything, manipulate memory into a convenience. They are masters at 'forgetting' facts that destroy their version," Swaraj said.

On climate change, Swaraj said the challenge posed by it requires more "serious action than talk" and asked the leaders of the developed world to help the less fortunate ones through technology transfer and Green Climate Financing.

She also warned the international community that there is a growing question mark over maritime security and that nuclear proliferation is again making dangerous headlines.

"Nuclear proliferation is back in the zone of dangerous headlines. Cyber security has become a source of deep insecurity," Swaraj said in an apparent reference to the continued provocative behaviour of North Korea which has been carrying out missile tests and nuclear tests in violation of the UN Security Council resolution.

She said a large part of the globe's population is still tortured by hunger and poverty, and added that the young are beginning to lose hope as they confront unemployment.

Women, victims of historic discrimination, are demanding what they must get gender empowerment, she noted.