India is a large stakeholder in Arctic: Iceland FM Gudlaugur Thor to WION 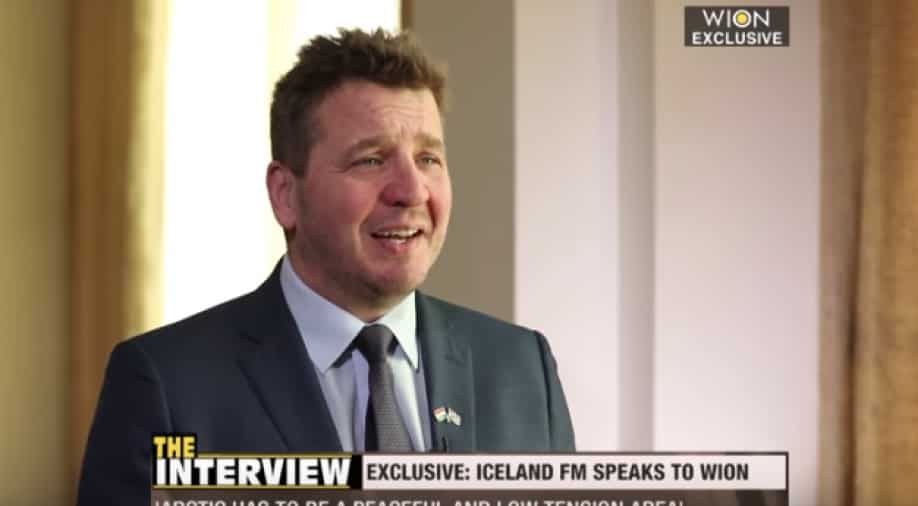 Actually, we find it is important that India has a regular role, Thor said

Iceland, an Arctic country and will chair the council next year, welcomed India's role in the region and called for increased ties between New Delhi and Reykjavik. He also spoke China's plan to have a polar silk route, Pakistan's status as a Major Non-Nato Ally (Iceland is Nato Country), Climate change, Brexit and future of European Union (EU). He also called on Bollywood (Gerua song from Bollywood movie Dilwale was shot in Iceland) to shoot more movies in Iceland.

WION: What is the focus of your India visit?

WION: How do you see India's role in the Arctic Council?

Gudlaugur Thor: Well, in the Arctic Council, we have Nordic countries like Russia, Canada, US. Other large countries, especially in Asia, are very important. When it comes to research and the scientific method, we are not going alone. We also need to have an international law when it comes to transportation and exploring natural resources. Because what we seeing now is shorting of the distances of sailing routes. Routes between Asia and Europe shorten by 40 per cent when the sailing route is open. Same when we saw Suez and Panama canal was opened. Its very important arctic is the peaceful area, low tension area. The only way is we work with all the stakeholder and India is a large stakeholder.

Gudlaugur Thor: Gerua is a very beautiful video, well recognised. We didn't know how famous these actors are. We realized it when they come to Iceland. People who knew them, Indian tourist were very interested.  We see a beautiful video. We know that Iceland film industry interested in working with the Indian film industry. Its been very successful. We see a lot of opportunities. Things you see in the video are not far away and it is easy to go.

WION: How popular is yoga in Iceland?

Gudlaugur Thor: It is not only yoga. Indian cuisine very popular. My favourite restaurant in Iceland is an Indian restaurant. Indian spices and Icelandic lamb go hand in hand.

WION: India has been calling for reforms at UN. Do you back India's bid at UNSC seat?

Gudlaugur Thor: We totally agree when it comes to UN reforms. It is good that Secretary-General emphasised on that. We have supported India at the security council. Actually, we find it is important that India has a regular role. We are not optimistic changes will happen. When it comes to value, Iceland and India do agree. That is why we both support UN reforms and support India to UNSC.

WION: But you don't sound optimistic?

Gudlaugur Thor: Well, there is someone who is dragging the reforms. We want UN to be a much more efficient instrument. Security Council should not block things.

Gudlaugur Thor: In general its good that we are building infrastructure project around the world. But very important that all multilateralism based on values we have built so far. Find it essential, the multilateralism should be based on rule of law, human rights and democratic values.

WION: China says its a near arctic country. Do you think so?

Gudlaugur Thor: Well it is important we work together on multilateralism when it comes to the Arctic. Of course, when we look at the Arctic, we need to look at the people. there are 4 million people in the Arctic. Can't make decisions without them. we also need transportations when it comes to exploiting resources. we need some kind of structure. That is why we supported India, China's observer status at the Arctic Council. Everyone needs to be on the table when you are discussing those topics. Otherwise, we won't succeed. The main thing is that the Arctic remains a low tension and peaceful area.

Gudlaugur Thor: Well, the challenge is there. No doubt about it.  I am an optimist. We need to address it and do it together. Iceland can't do alone. Even India can't do alone. I see the positive sign, lot of enthusiasm when it comes to fighting against climate change.

WION: But a Major country has withdrawn from the Paris Climate deal?

Gudlaugur Thor: Yes, but at the same time, both states in the US and huge firms and cities are more enthusiastic than ever when it comes fighting climate change. It is not all bleak. It needs to be discussed and we need to listen to voices who are concerned. We can't ignore that. Because if we do we can do in an open and transparent manner based on scientific knowledge.

WION: Europe is not going through a positive phase?

Gudlaugur Thor: Europe is not about institutions. There are challenges they need to sort out. European nations working together. Europe has layers of cooperation. It's not only EU. there is EFTA, NATO, EEA, EUROZONE. We have layers of cooperation. The best way is to approach is via the a la carte way.  If we do that it will lower the tension. It's not me who makes a decision. We are outside EU.

WION: What are the advantages of staying away from EU. You are not part of EU?

Gudlaugur Thor: These are challenges we hope are resolved. Its very important they are resolved. We are not part of EU, these are our friends and allies, we wish them all the best so that they can try to find some solution. Its clear advantage we not part of EU. we have access to European markets. Very important for us. We need free trade all around the world. A perfect example of the importance of free trade. We used to be poor and we would still be poor if we didn't have access to others markets and our markets are not open. Every once in while this idea of protectionism comes up. It is always a bad idea. We are just emphasizing the importance of free trade.

Gudlaugur Thor:  Defiantly. The policy is to have a free trade agreement between EFTA and India. It is a good idea. you will only benefit from it. you will never lose by having FTA with EFTA.

WION: What suggestion would you like to give to British PM May?

Gudlaugur Thor:  From the start, Brexit has been a priority for us. The UK is our 2nd most important trading partner. Fifth largest economy. We are saying do not put any trade restrictions in Europe. Think in a constructive way. If we can be part of the solution. For example, if UK would like to be part of EFTA or EEA we should look in a positive way. It will be awful if we see trade restrictions in Europe in future. It is just, we should try to work in a constructive way and look long term. We should think about people in Europe and not institution.

WION: You are part of NATO. US president is calling for budget cuts. Your take?

Gudlaugur Thor:  NATO is an extremely important organization. NATO is the cornerstone of our foreign policy, a stronger supporter of NATO and it needs to be strengthened. And we are seeing that, since 2014 increase in the defence budget. It going in the right direction. And we need to have to strong defence, for reasons we all know.

WION: Voices in Washington say Pakistan should be removed from its status of major non-NATO ally. Your thoughts?