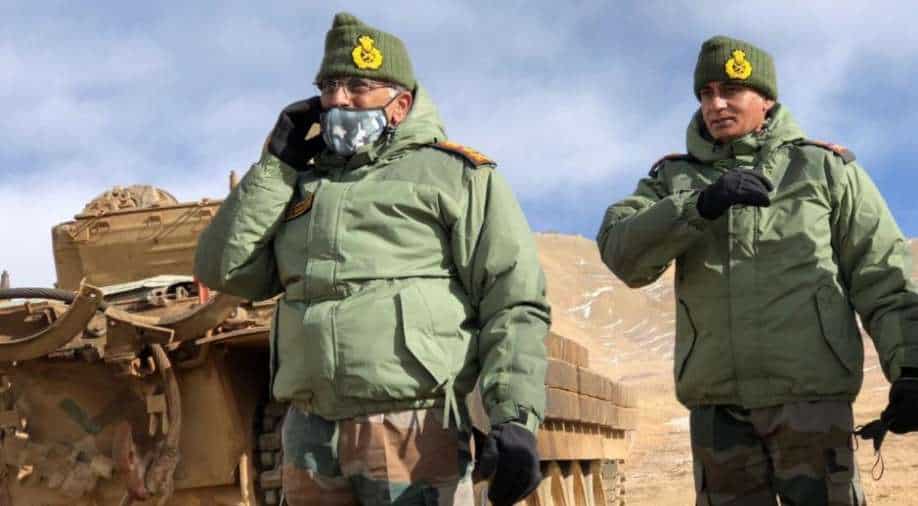 Army chief General MM Naravane interacted with the troops deployed in the forward areas along the India-China border at LAC and exhorted all ranks to continue working with same zeal and enthusiasm.

Amid the India-China standoff along the Line of Actual Control(LAC), India's Army chief General Naravane today visited forwards areas in eastern Ladakh to review the situation.

General Naravane visited Rechin La and met Army officers and soldiers in order to gauge the country's military preparedness. The Army chief was briefed by Lt Gen PGK Menon, the commander of the Leh-based 14 Corps.

General MM Naravane #COAS visited forward base #Tara and interacted with the local commanders and troops. He appreciated their high morale and state of readiness. #IndianArmy#NationFirst pic.twitter.com/Yr4GTE5Q11

Naravane who reached the LAC on Wednesday morning was on a day-long visit to the China border.

General MM Naravane interacted with the troops deployed in the forward areas and exhorted all ranks to continue working with same zeal and enthusiasm, the Army said. The Army chief also distributed sweets and cakes on the eve of Christmas.

General MM Naravane #COAS interacted with the troops deployed in forward areas and exhorted all ranks to continue working with same zeal and enthusiasm. #COAS also distributed sweets and #cakes on the eve of #Christmas. #CelebratingFestivalsTogether#IndianArmy pic.twitter.com/Fq22qqIqn3

General Naravane's visit was mainly aimed at meeting local commanders and troops and to ensure state of readiness. The Army chief also undertook on the "spot inspection" of the state of habitat of troops on the forward line of defences at Rechin La," the Army said.

Tensions between India and China has been on the razor's edge since June when troops from both sides clashed at the Galwan Valley on June 15-16 leading to the death of 20 Indian soldiers, although PLA troops were also killed in action but the Chinese foreign ministry has refused to divulge the casualty figure.

Although both sides have held several rounds of disengagement talks both at the diplomatic and military level but troops continue to be deployed along the LAC with the Chinese side refusing to fall back despite the harsh winter.

Reports say at least 50,000 Indian troops have been deployed along the LAC with the equal number by the Chinese PLA including heavy arms, ammunition and Air Force jets.