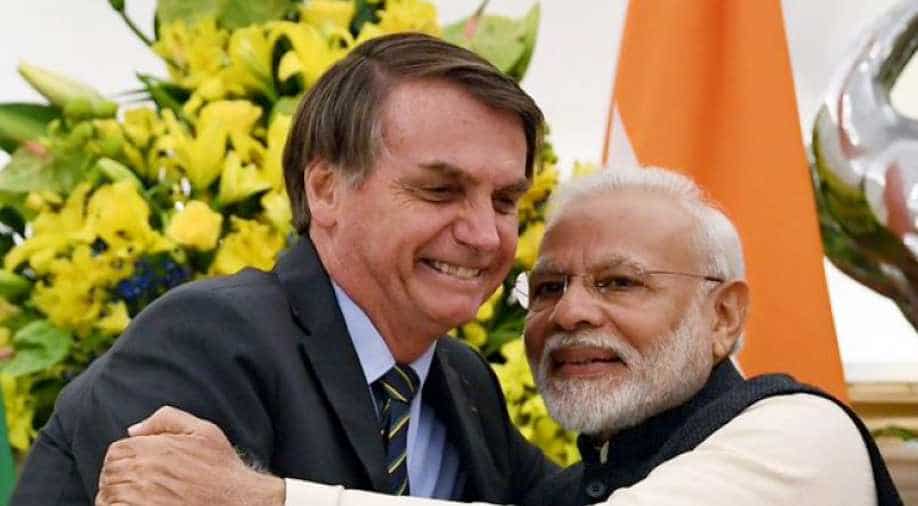 In the action plan, the two countries have set specific goals for deeper cooperation in areas of defence and security, trade and commerce, agriculture and others.

India and Brazil on Saturday inked 15 agreements to ramp up cooperation in a wide range of areas and unveiled an action plan to further broadbase strategic ties after talks between Prime Minister Narendra Modi and Brazilian President Jair Messias Bolsonaro.

In the action plan, the two countries have set specific goals for deeper cooperation in areas of defence and security, trade and commerce, agriculture, civil aviation, energy, environment, health and innovation and vowed to work together to conclude an agreement to deal with international terrorism.

The major focus of the talks was on boosting bilateral trade and investment as both the large economies were hit by global economic slowdown.

The 15 agreements will provide for cooperation in a wide range of areas including oil and gas, mineral resources, traditional medicine, animal husbandry, bioenergy and trade and investment.

"Your visit to India has opened a new chapter in ties between India and Brazil," Modi said, summing up the outcome of his talks with Bolsonaro.

Calling Brazil a valuable partner in India's economic growth, the prime minister said both the countries have been on the same page on various global issues and exuded confidence that the ties will strengthen further.

"Despite geographical distance, both India and Brazil are together on various global issues as there is convergence in our views," Modi said in his media statement in the presence of Bolsonaro.

The prime minister said focus is being given to new ways of boosting defence industrial cooperation.

"We want to have broad-based cooperation in defence," he added.

On his part Bolsonaro said the two countries have further consolidated the already strong ties by signing 15 agreements which will provide for cooperation in a range of areas.

According to the action plan, the two countries will encourage greater collaboration between their defence industrial bases and work together to conclude an agreement in combating international terrorism and transnational organised crime.

It mentioned that the two sides will strengthen established institutional mechanisms and promote coordination on bilateral, plurilateral and multilateral issues of mutual interest based on the principles of equality and trust.

The Brazilian president will grace the Republic Day Parade as chief guest on Sunday.

Earlier, the Brazilian president was given a ceremonial welcome at the Rashtrapati Bhavan in the presence of President Ram Nath Kovind and Modi.

India's ties with Brazil, the largest country in Latin America, have been on an upswing in the last few years. The country has a population of 210 million with $1.8 trillion economy.
This is the first visit of President Bolsonaro to India.

The volume of bilateral trade was $8.2 billion in 2018-19. This included $3.8 billion worth of Indian exports to Brazil and $4.4 million as imports by India.

Both the governments feel there is a huge potential to enhance bilateral trade further.