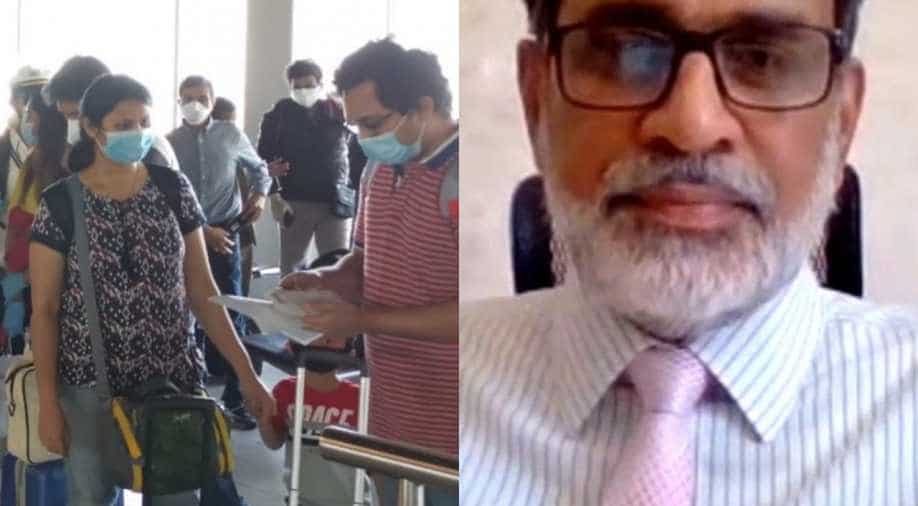 Indian envoy to the Netherlands Venu Rajamony said that the mission has 'started outreach to the business community of both sides - Indians and Dutch companies'.

India and Netherlands are in touch with each other to make sure businesses and economic relation continue in the world that will emerge in a post-COVID-19 world.

Speaking exclusively to our Principal Diplomatic Correspondent, Sidhant Sibal from the Hague, Indian envoy to the Netherlands Venu Rajamony said that the mission has "started outreach to the business community of both sides--Indians and Dutch companies" and "talking to the business community on India Dutch economic relations and how we face the post COVID-19 world.".

Indian and the Dutch commerce minister had spoken to each other and on June 4..

WION: If you can tell us about the repatriation?

Venu Rajamony: Just two days back, we managed to use the services of KLM to send to around 270 passengers from here back, a large number of them came from Latin American countries like Mexico and Peru as well as Portugal from where people have not been able to go back.

It was a flight which was headed to Mumbai. It is the first group of passengers to go back to India after two months of lockdown and it took coordination between the Indian mission with the government in Delhi as well as KLM and we are very happy passengers have reached safely, they have gone into quarantine and we are working on next options of sending more people to India.

We have around 1,000 people waiting to go to India for many reasons. We will have an Air India flight which will go on June 8 to Delhi and it will take a large number of people. We are trying to see if we can get another Air India flight to South India and we are waiting for confirmation regarding that. We are also exploring if we can get more KLM flights to go back to India.

WION: How is the Indian mission reaching out to stranded Indian citizens in the country...

Venu Rajamony: The Netherlands is home to the largest community of Indian origin and Indians in the whole of European Union post exist of the UK. It was No-2 after the UK in Europe. Large Indian presence here and Amsterdam is a very important hub, airports here used to connect to India on a daily basis.

When the lockdown began, we had a large number of Indians who got stranded here. The first effort we made was to send 115 Indians who came from Latin America and North America and were stranded here without being able to come to Europe, go to India, go back to North America. For two and half days they were stranded at the Schipol airport and they included a pregnant lady who a member of the embassy took to a local hospital because of some emergency reason.

So our staff was fully looking after the people at the airport and the airport had virtually shut down by that time. We work very closely with KLM and we finally managed to put them on a KLM flight and get special permission to enter India.

After that, we still had 51 people who were stranded in Europe and had come here as tourists. We still have a group of 20 people who were workers who lost the job during the crisis, they were dismissed by the employers and were without accommodation, without food.

So all these 51 people mission has been looking after, some of them were headed to Mumbai we were able to put them on KLM flight and send them.

The remaining we hope to send to Delhi as soon as possible. From Delhi, they will make way to onward destinations.

But beyond them, I can tell you around 1,000 people waiting here and embassy from day one have been working 24x7 to connect with them and to connect with the community at large to make ourselves available to them because of the local restrictions and as well as the advisory from India we were all working from home, online means and we were coming into the embassy when absolutely necessary but we continually provided the contact number, made them available.

I gave a large number of video messages and interacted through various social media platform - Webex, Microsoft, skype with different sections of the Indian community and the goal was to tell them don't worry, if you are in a crisis, you can contact us  - all you need to do is send an email to us and we will come back to you.

We had to boost morale, people were broken-hearted that they could not go back. many of them had financial problems, many of them had mental stress. We have a large number of Indian students in the Netherlands, about 3,500 they understandably are very young and education was shifted online and universities were shut down.

They were very anxious to go back to India. We tried to help them in whatever way possible. So extensive outreach to the community via online means of every kind and as embassy made a point to be available full time - day or night, Saturday or Sunday.

Anyone can reach us anytime, either via Twitter, Facebook, email or phone call and we are happy to say, our proactive approach has been noted by the community has been well appreciated.

Even the Dutch foreign office expressed its appreciation and said was very happy and that the Indian embassy is playing such an active approach.

We have worked closely with the Dutch govt in helping them bring their nationals back who were stranded in India and in providing visa extensions and other services community required.

While in India numbers are still going, in Netherlands number have been steadily coming down. The government has announced a calender on how they will progressively liberalise the restrictions all the way up to 1 September.

More and more people will go out from June1, restaurants will open with a maximum of 30 people observing social distance.

We are trying to ramp up our machines and go back to normal. Even though the crisis period our priority was stranded Indians, and keeping in touch with the Indian community we have also started outreach to the business community of both sides--Indians and Dutch companies. We have tried to see how we can help them, what problem they facing in supply chain and talking to the business community on India Dutch economic relations and how we face the post-COVID-19 world.

What is the outlook we see, what is the scene we see so that we can work in partnership to continue to ensure this relationship grows.

WION: Any reports of Indians infected or fatalities due to COVID-19?

Venu Rajamony: In the Netherlands, they normally don't test everyone. They have followed a policy in which the focus is on the elderly and the most vulnerable.

So testing has been restricted to health workers or those who need it the most. For the majority of the people advice has been rest at home, take paracetamol, it will come like flu and go away.

The actual number of infected figures, most recent is around 45445 and the death is around 5830 but specific figures on how many Indians have been infected we don't have.

We know by personal accounts, many people had it and recovered. We know one case of one fatality of an Indian citizen who had other complications also. He was married to a health worker. It is not clear if he contracted the virus or because of the virus he passed away or the health worker was asymptomatic and he had picked up the virus from the hospital and then it went to him. The embassy played an active role in supporting them and helping the spouse and cremate him.

WION: Any exchange of best ideas between both the countries?

Venu Rajamony: Health ministries on both sides are entirely focused on handling the domestic situation and there is not much contact between the government on the health field yet.

On June 4, FMs of both countries will speak to each other. In the private sector, the serum institute of India which is the largest producer of vaccines has a subsidiary in the Netherlands.

The subsidiary is currently engaged in producing BCG vaccines as well as polio vaccines and it has an extremely modern facility but due to the COVID-19 crisis, they are turning towards, research on the vaccine and how collaboration can be done.

Johnson and Johnson has a major facility in the country and is funded by the US to rapidly expand to COVID-19 vaccine.

We on our part, as an embassy have been reporting all developments here in the country vaccines, medicines, treatment protocol, research into if HCQ will work, or BCG vaccine will work we have been feeding regularly to MEA and other authorities and waiting for responses to build bridges of cooperation.

The Netherlands is a leader in innovation, science and tech. Health care is an extremely important subject for both.

The Netherlands is home to Philips which is one of the largest health care provider and today in crisis time they rapidly ramping up production of ventilators and have already manufactured a lot of health equipment in India and announced a fresh investment of $50 million to ramp up production facilities in India.

We see all this as areas of further collaboration in future. We had the Dutch health minister visit twice in the last 3 years along with Dutch PM and the King and Queen.

The health minister has travelled all around the country and has been impressed by medical facilities in India. The two countries have been collaborating on research into antimicrobial bacteria. We have had delegations come from India to the Netherlands in the area of digital health.

We are trying to focus on the startups into the health sector. So great deal in the activity. Leading medical centres of the country have already had collaborations and we hope they can be consolidated and strengthed to build bridges of cooperation both to handle COVID-19 crisis and health care.

I would also like to mention that Ayush is a major area of focus, we have had large scale international yoga day celebrations in the Netherlands in most prestigious venues.

This year it will be online due to social distancing. We had a number of events relating to Ayurveda. We had Ayush minister visit here for an international conference and interact with health minister of Netherlands. We believe Ayurveda can help in building immunity.

We believe Ayurveda and Yoga can be of tremendous benefit to society like the Netherlands which has a large elderly population and which has an ageing society to improve wellness, to build immunity to reduce health cost.

One-third of the budget here goes to health care, and health cost is a major concern for the Dutch government and how you can provide quality care at a reduced cost and we think Ayurveda and yoga can help in all this.