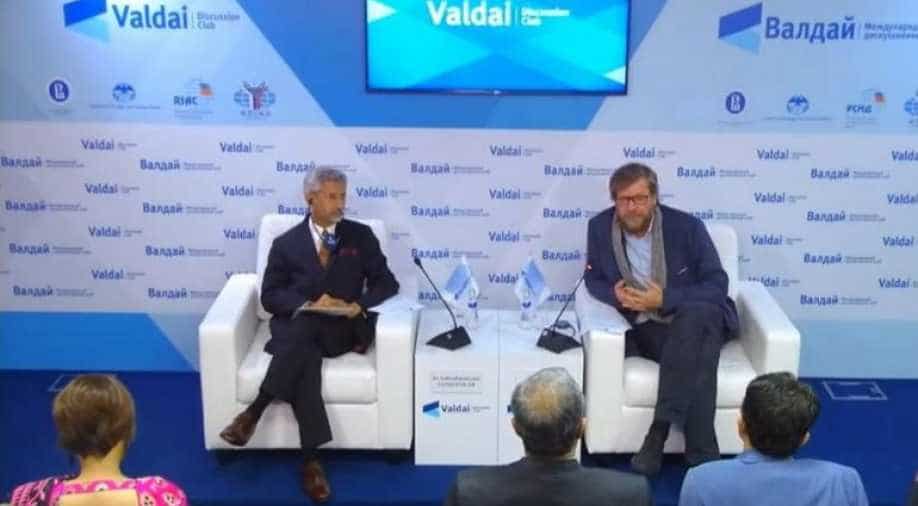 'Problem with Pakistan is very different. I would say if today you look at international relations, I cannot think of any other country in the world, which actually uses terrorism as a diplomatic tool against its neighbour,' Jaishankar said.

India's External Affairs Minister S Jaishankar has slammed Pakistan for using terror as a state policy and a country that has been obstructing trade and connectivity in the region.

Speaking at the powerful think tank Valdai club in Moscow EAM said, "Problem with Pakistan is very different. I would say if today you look at international relations, I cannot think of any other country in the world, which actually uses terrorism as a diplomatic tool against its neighbour. It a very unique phenomenon."

Jaishankar highlighted how Islamabad refused to grant the most favoured nation or MFN status to India despite New Delhi granting it. India had withdrawn the status after the February 14 Pulwama terror attack perpetrated by Pakistan based Jaish-e-Mohammed terror group.

Jaishankar said, "We have struggled to have normal trade. They would not give us MFN status, although we are members of the WTO and Gatt. They would not allow connectivity from India to Afghanistan."

Pakistan has also been hindering India-Afghanistan connectivity. To increase connectivity India and Afghanistan started the air corridor which has been expanded to many cities of both the countries.

The foreign minister further explained, "So if have a neighbour who will not trade with you normally, who would not allow connectivity, using terrorism as a means of pressurizing you is okay as a policy, it is not a normal neighbour. We have some unique problem out there. We will find ways to deal with. There are complicated political and historical reasons for it"

Asked if, in foreseeable future, there can convergences between the two neighbours, Jaishankar said, "It will certainly would be my hope that they would become a normal neighbour, one day. I mean, that is something I would like to see happen."

The comments by Jaishankar comes even after Pakistan on Tuesday said that it is considering a complete closure of Air Space to India and a complete ban on the use of Pakistan land routes for Indian trade to Afghanistan.

Jaishankar is on a two-day Russia visit and will meet his counterpart Sergey Lavrov on Wednesday.