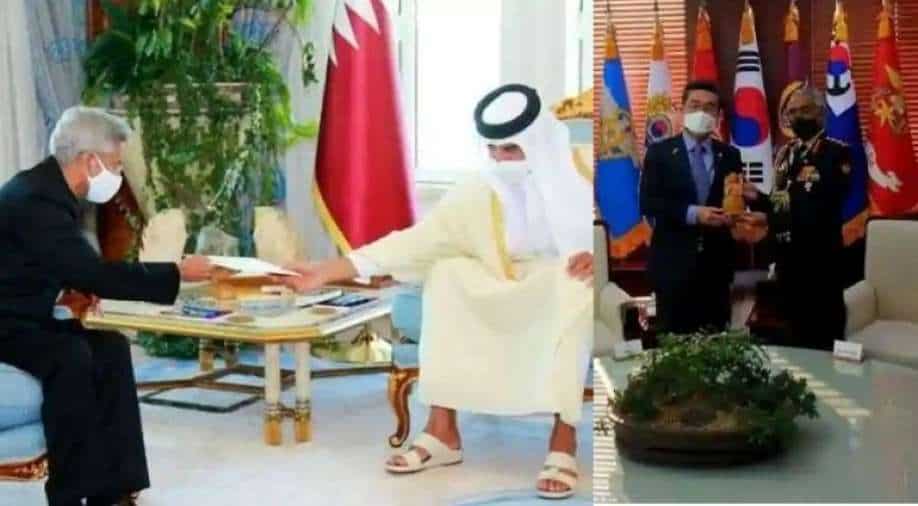 S Jaishankar is in Qatar for a two-day visit. He attended an India-Qatar business roundtable and interacted with the Indian community there. He is also expected to meet the Qatari deputy prime minsiter and foreign minister

India is setting the ground for the post-pandemic world and is slowly but surely stepping into a leadership role. The proofs are the unprecedented visits, cementing of ties, outreach programs, formation of startegic alliances and tapping into opportunities.

The army chief's visit to Saudi Arabia was unprecedented. It came on the heels of Riyadh's deteriorating ties with Islamabad. Pakistan's army chief Qamar Javed Bajwa was not allowed to meet the Saudi crown prince in August but the Indian army chief was welcomed by the top Saudi generals.

General's visit also came on the heels of India's External Affairs minister S Jaishankar's visit to the UAE and Bahrain.

As we speak, Jaishankar is in Qatar for a two-day visit. He attended an India-Qatar business roundtable and interacted with the Indian community there. He is also expected to meet the Qatari deputy prime minsiter and foreign minister Mohammed bin Abdulrahman bin Jassim Al Thani.

At least 700,000 Indians live in Qatar. Many Indian workers have benefited from Qatar's recent labour reforms which includes a 25 per cent hike in the minimum wage and dilution of a clause that required workers to take the employer's consent before switching jobs.

In 2019, the bilateral trade between Qatar and India was worth $10.95 billion. The Qatar investment authority has invested $600 million in two Indian firms.

Jaishankar's visit is expected to focus on trade and energy cooperation. You will also see that the visit goes beyond all of this as it has a lot to do with West Asia's shifting sands and an emerging post-pandemic world — one that's being built on strategic alliances.

The gulf cooperation council countries recently held talks on ending a rift with Qatar. It is talking about lifting air, land and water blockade of Qatar because the region has a common enemy — Iran.

It just so happens that Iran is getting closer to China. However, another interesting observation is that China is also a country that India has a stand-off with in Ladakh.

India's ties with West Asia are no longer anchored on just oil, diaspora and remittances. The relationship is now strategic as there are common foes.

West Asia is distancing itself from Pakistan, it is coming together against Iran and both — Iran and Pakistan — are close to China.

The virtual GCC discussion was held this morning at a time when India's foreign affairs minister is in Qatar.

There is another very significant visit that's underway. India's Army Chief is on a three-day visit to South Korea. Seoul has been one of India's major weapon suppliers. It also happens to be a country that is witnessing growing rift with China.

On General Naravane's agenda is bolstering of military cooperation. He will be calling on the Korean defence minister, Army chief, chairman of joint chiefs of staff and Korea's minister of defence aquisition planning administration.

Another point to consider is that South Korea is fighting Chinese aggression at East China sea. It is pushing for maritime rules-based order. There is also an online war as the South Korean band BTS faced a backlash from Chinese state media. The common foe is very clearly visible in these developments.