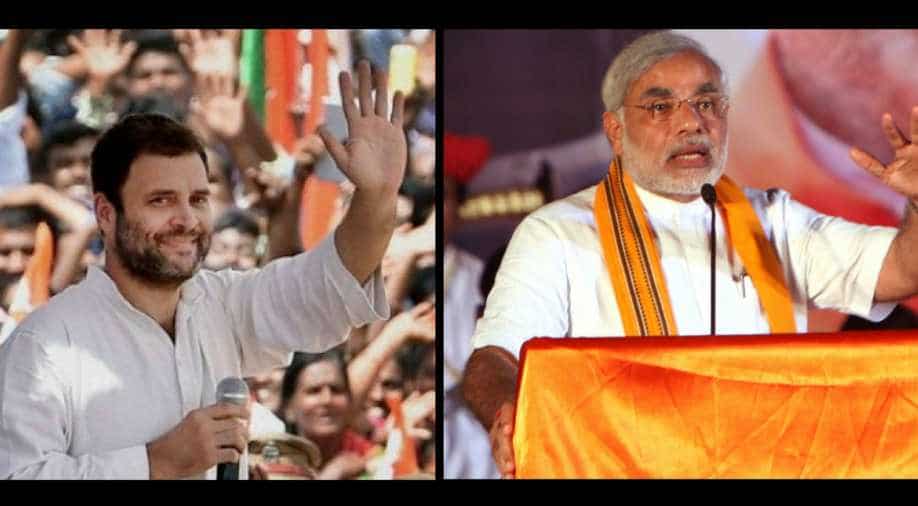 The success of Gujarat will show the way to BJP for 2019 campaign. Photograph:( Others )

During the last Assembly election in Gujarat, Narendra Modi was the chief minister; Shankersinh Vaghela was the tallest Congress leader in the State; veteran Patidar leader Keshubhai Patel had rebelled against the Bharatiya Janata Party and floated his own outfit, the Gujarat Parivartan Party; Sonia Gandhi had vigorously campaigned for the Congress; the Congress was in power at the Centre; 26/11 terrorist Ajmal Kasab was hanged; and Shiv Sena supremo Balasaheb Thackeray had passed away.

The BJP led by Modi had registered a resounding victory while the Congress helmed by Vaghela and consisting of a motley of lesser leaders managed just about half the number of seats the winning party got. Keshubhai Patel’s party, contrary to its partvartan promise, could bring no change, ending with a paltry two seats. The so-called KHAM (Kshatriya, Harijan, Adivasi, Muslim) combine, that had been crafted in the 1980s by Congress leader Madhavsinh Solanki as his party’s vote bank, failed to deliver — as it had on previous occasions in the past decade or so.

The last election prepared the ground for Modi’s elevation to the national stage; the 2017 result could solidify his and his party’s position in the 2019 Lok Sabha poll.

Now, as the people of Gujarat prepare to vote in a few weeks from now for a new Assembly, much has changed. Modi is the country’s Prime Minister; Vaghela has quit the Congress and is expected to harm his former party’s prospects; Keshubhai Patel has reconciled to being a non-entity in the State’s politics; the Hardik Patel factor has been introduced to lure the Patidar votes away from the BJP; Balasaheb Thackeray’s son and successor Uddhav Thackeray has turned into more of a rival than an ally (which is officially is) of the ruling party; Sonia Gandhi may not campaign extensively owing to her health; Rahul Gandhi, soon to be made Congress president, is at the forefront of his party’s electoral battle; and, the BJP has replaced the Congress at the Centre.

Yet, some things remain the same. Modi in 2017, as in 2012, is the BJP’s mascot and the Congress’s chief enemy and a wall yet to be dented. Like in 2012, Modi is hard selling ‘development’ and Gujarati pride in 2017 as well. Rahul Gandhi is seeking to establish his credentials as a serious and credible politician, something he had attempted in 2012 as well.

The Muslim voters of the State are as wary of the BJP today as they were in 2012, and they have to do with the ruling party’s slogan of “Sabka Saath, Sabka Vikas”. Finally, if the Gujarat election in 2012 was important on account of Modi, it is more so in 2017. The last election prepared the ground for Modi’s elevation to the national stage; the 2017 result could solidify his and his party’s position in the 2019 Lok Sabha poll.

The gloves are off on both the sides. Prime Minister Modi and Congress vice-president Rahul Gandhi have visited Gujarat on several occasions and are expected to keep doing so in the run-up to the election. If Modi has sought to leverage ‘development’, Rahul Gandhi has concentrated on the ‘divisive’ nature of his rival and rubbished the claimed development.

If Modi has sought to leverage ‘development’, Rahul Gandhi has concentrated on the ‘divisive’ nature of his rival and rubbished the claimed development.

Modi talks of the Congress’s corruption while Rahul Gandhi attacks the BJP for ‘atrocities’ on Scheduled Castes and discrimination against the Muslims. If the BJP brandishes the World Bank’s Doing Business report as a vindication of the Modi regime’s economic policies, the Congress alleges the report was ‘manufactured’ and ‘fixed’. The Congress cautions Gujarat’s voters against social and economic disasters in case they let the BJP return to power, and the BJP warns them of a rude jolt to the development and Gujarati pride if the Congress succeeds.

The Congress believes, and with good reasons of its own, that it has the best chance in two decades to oust the BJP from the State. It may not have been wrong in sensing a level of disaffection among a section of the traditional BJP supporters — the business community and the Patidars, for example. The Congress is seeking to tap into the discontent among traders over disruptions caused by the Goods and Services Tax (GST) regime, while it is hoping to swing the Patel votes its way by holding out the promise of reservations in Government jobs and educational institutions.

With Patidar leader Hardik Patel apparently throwing his weight behind the Congress, the opposition party is upbeat. Add to this, the anger in the Scheduled Caste community following the Una incident last year under the BJP rule. The Congress hopes to exploit this as well, although the Dalit population in the State is too insignificant to make a major overall electoral impact.

The BJP is banking on its strong and decades-long socio-economic connect with the Patidar community to neutralise the Hardik Patel fallout.

Mindful of the new challenges which have come its way, the BJP has adopted a multi-pronged approach. For one, it has stepped up its focus on development and Gujarati pride — juxtaposing it with the Congress’s ‘indifference’. While dedicating the Sardar Sarovar project to the nation, Modi did not fail to underline what he alleged were obstacles that Congress regimes at the Centre had placed in the early completion of the dam work. In later meetings in the State, he spoke of the delays the Congress-led UPA had effected, in the name of environment protection, in developing coastal Gujarat.

Modi spoke of the Congress’s sidelining of Gujarati pride — freedom fighter, senior Congress leader and independent India’s first Minister for Home Affairs, Sardar Vallabhbhai Patel — and mentioned the ongoing work on the Statue of Unity that the BJP had undertaken in the Iron Man’s memory. It has been wooing important leaders of the Patidar community to blunt the Hardik Patel impact, and also highlighting Hardik Patel’s proximity to the Congress — a party which it says had consistently betrayed the Patel cause. The BJP is banking on its strong and decades-long socio-economic connect with the Patidar community to neutralise the Hardik Patel fallout.

As campaigning picks up and nominations are filed and confirmed, there will emerge a better understanding at constituency levels on which way the battle is going. Certain issues will gain steam while others may fall by the wayside. The larger picture, going by published opinion polls so far, appears to be in the BJP’s favour. The party is expected to sweep as it did in 2012. These surveys also inform that a majority of the people are unhappy with the GST mess and the effects of demonetisation. And yet, if the BJP still wins, it can only mean one thing — and one that is discouraging to the Congress: People may be unhappy with some of the BJP Government’s decisions, but they will not necessarily vote against the party.