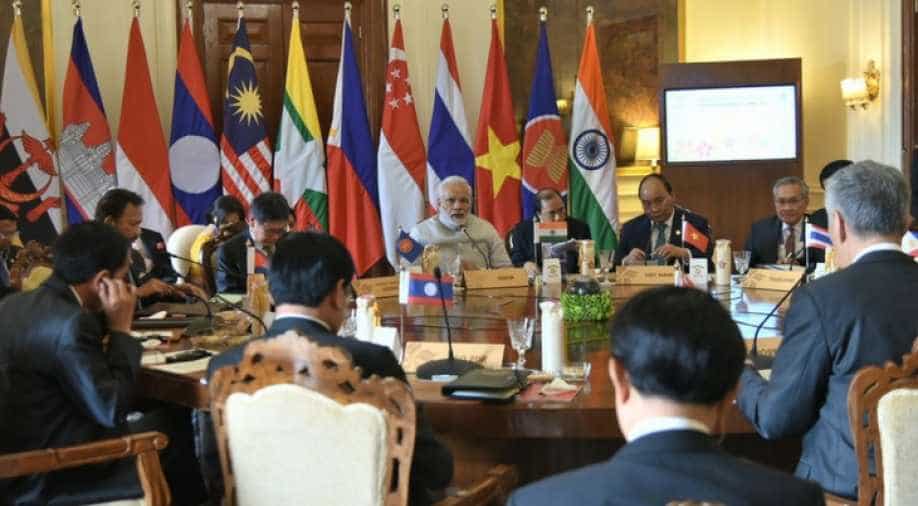 With Asean leaders by his side, Prime Minister Narendra Modi made a strong pitch for nations to follow the international law of the seas in the Indo-Pacific region - in a veiled attack on China which has been accused by most of its neighbours of violating the rule of law in the South China Sea.

"India shares the Asean vision for rule-based societies and values of peace," Modi said in his opening remarks at the plenary session here of the Commemorative Summit to mark 25 years of the India-Association of Southeast Asian Nations (Asean) Dialogue Partnership.

He was speaking on the second day of the Association of the South East Asian Nations-India commemorative summit, which marks the 25 years of India’s ties with the bloc.

Delighted to welcome you all to the ASEAN-India commemorative summit. Our shared voyage goes back thousands of years. It is India's privilege to host the ASEAN leaders. The leaders will be our honoured guests at the Republic Day celebrations, said PM Modi.

Since 1992 our partnership has evolved, we have made success in implementing the objective of ASEAN-India partisanship for peace, progress, and shared prosperity through a five-year plan of action, he added.

India shares the ASEAN vision for rule-based societies and values of peace. We are committed to working with ASEAN nations to enhance collaboration in the maritime domain. It highlights the importance of our strategic partnership placing ASEAN at the centre of India's Act East Policy. Our friendship has been nurtured by our shared culture & civilisation linkages, said PM Modi.

"The Ramayana, the ancient India epic, continues to be a valuable shared legacy in ASEAN and Indian subcontinent. Buddhism also binds us closely. Islam in many parts of South East Asia has a distinctive Indian connection going back several centuries," he said.

The India-ASEAN (Association of Southeast Asian Nations) Summit is being held in the national capital, with trade and connectivity topping the agenda.

As per officials, the two-day India-ASEAN Commemorative Summit in New Delhi is expected to give a boost to the cooperation in key areas of counter-terrorism, security and connectivity amidst increasing Chinese economic and military assertiveness in the region.

This year, the heads of state of all ASEAN nations will grace India's Republic Day celebrations.