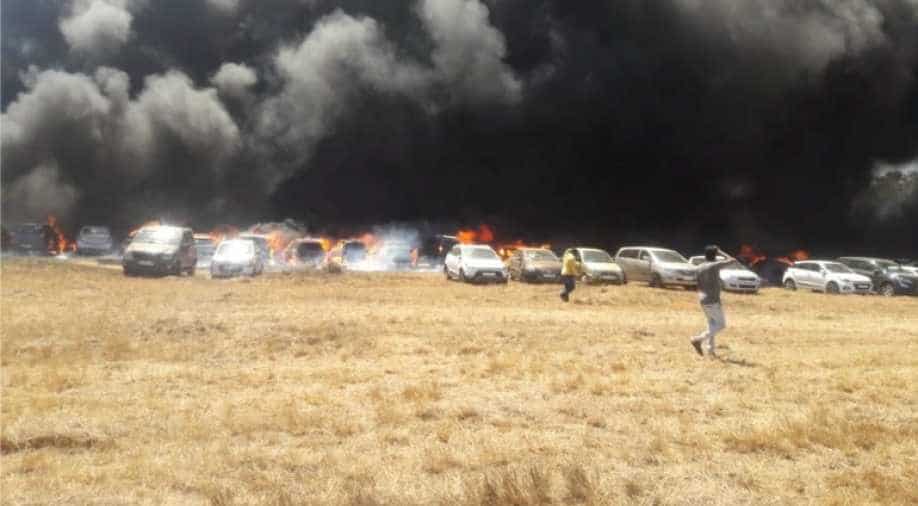 Fire breaks out at car parking area near the venue of Aero India. Photograph:( ANI )

According to the fire department, around 80-100 cars have been gutted in the fire.

A major fire broke out on Saturday in the parking area of Aero India 2019 event in Bengaluru.

The fire department mentioned nearly 100 gutted in the mishap, adding that the fire is now contained. No loss of life has been reported yet, news agency ANI reported.

"Totally about 100 cars burnt in the fire. Fire spread is controlled by creating a gap by removing adjacent cars. Fire under control now. No injuries or any harm to people reported. Likely cause: dry grass fire aided by heavy winds," tweeted MN Reddi, Director General, Fire and Emergency Services.

Bengaluru: Fire breaks out at car parking area near the venue of #AeroIndia2019 pic.twitter.com/bwIrYx5fzc

#WATCH Nearly 80-100 cars gutted after fire broke out in dry grass at the car parking area near #AeroIndia2019 venue in Bengaluru pic.twitter.com/xGdDKm4D3V

The incident comes just a few days after two Surya Kiran aircraft on Tuesday, practising for the Aero India air show, collided in Bengaluru leading to the death of one pilot.

The two planes were carrying a total of three pilots — one of the planes had a co-pilot but only two pilots were able to eject.