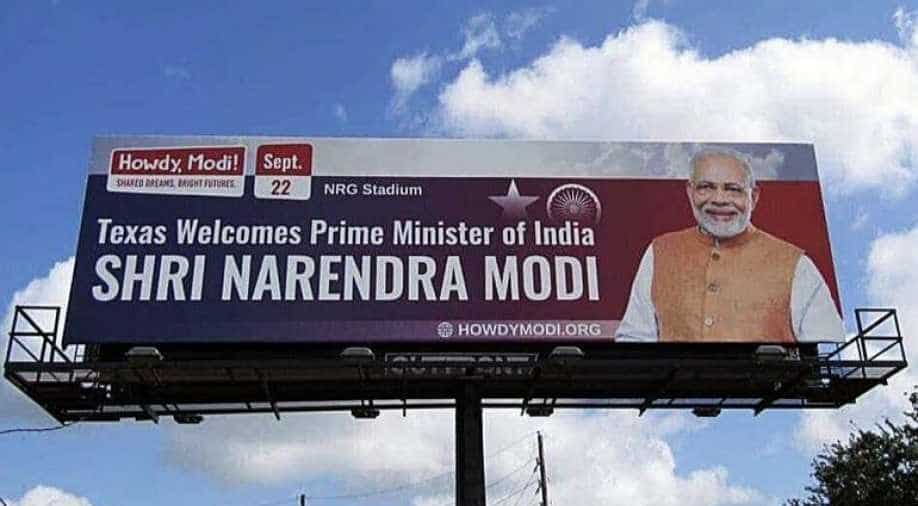 Hoarding of Prime Minister Narendra Modi being placed near NRG Stadium in Houston on his "Howdy Modi" event which will be held on Sunday. Photograph:( ANI )

The excitement among the Indian-Americans has reached a crescendo when the US President Donald Trump announced his presence along with some Democrats signifying the Importance of India to the United States.

Preparations are in full swing as Indian Prime Minister Narendra Modi is all set to address the big-ticket Indian diaspora event 'Howdy Modi' in Houston on Sunday.

The excitement among the Indian-Americans has reached a crescendo when the US President Donald Trump announced his presence along with some Democrats signifying the Importance of India-US ties.

Before embarking on his visit to the United States, the Prime Minister laid out in clear terms his mission -- to present India as the vibrant land of opportunities, as a reliable partner, and as a global leader -- and the PM's jam-packed schedule is a testimony to this mission.

Modi will also be looking to provide fresh impetus to India-US ties.

PM Modi highlighted education, skills, research and technology as sectors where the two countries can cooperate.

''Together, India and the US can make a stable and prosperous world,'' he said.

Trade has been a crucial sticking point between the two countries, and the two leaders will be looking to iron out differences when they sit down for their third bilateral meet on Tuesday.

At the United Nations, the prime minister will showcase his government's achievements over the last five years. He will also outline India's future as a leader in shaping global politics and socio-economic agenda.

Multilateralism will be the overarching theme of Modi's pitch at the United Nations.

Modi will also be launching the Gandhi solar park at the UN premises. The park with 193 solar panels has been built using a one million dollar grant from the Indian government.

With yesterday's corporate tax cut in his arsenal, Modi will be looking to woo the multinationals firms to invest in India.

But all these engagements will probably be dwarfed by Howdy Modi event scheduled on Sunday. With over 50,000 people slated to attend, the event will be the largest ever gathering for a visiting head of state in the US.

In 2014, Modi was a political enigma when he visited the US but now, 5 years later the prime minister will arrive on the American shores as one of the most sought-after leaders at the global stage.