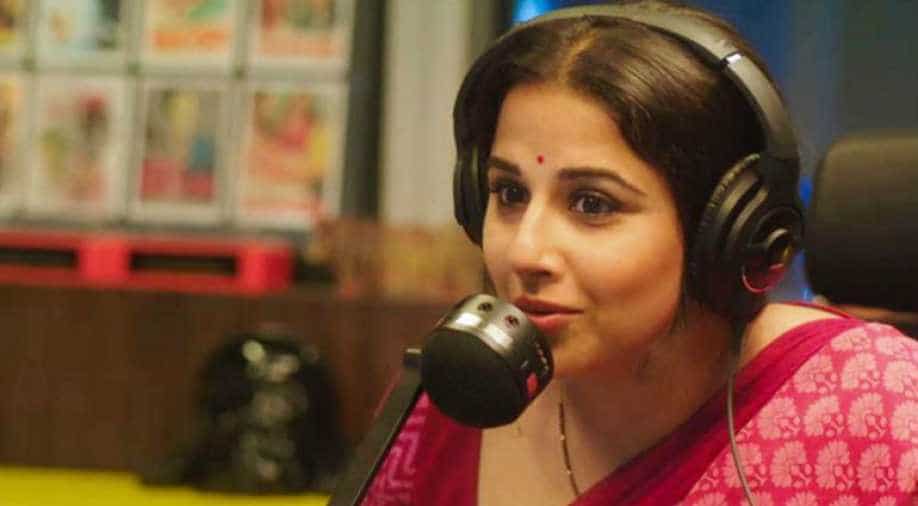 Vidya Balan in a still from Tumhari Sulu Photograph:( Others )

2017 has seen some incredible stories- stories that have highlighted the middle-class and its problems in the most endearing, hilarious ways. From Bareilly Ki Barfi to Shubh Mangal Saavdhan to the recent Qarib Qarib Singlle- all have had middle-class protagonists. While these films have been primarily love stories with middle-class values as a backdrop, it is Suresh Triveni’s Tumhari Sulu that scores over with its story of an ordinary housewife with extraordinary dreams.

Sulochana Dubey or Sullu ( Vidya Balan) is a regular housewife grappling with everyday mundane life. Her achievements are nothing noteworthy yet she is quite proud of them and happily flaunts them. She has an encouraging husband Ashok (Manav Kaul) who indulges almost all her whims and is always on her team and a nearly teenage son who is mostly amused by the antics of his dramatic parents.

One call from a local FM channel declaring her as the winner of a contest lands Sulu at the radio channel’s office to collect her reward. A chance encounter with her favourite RJ Anjali (Malishka) makes her meet the head of the channel, Mayra (Neha Dhupia ) and she manages to convince her that she can become the next RJ.

Naturally, Sulu is an instant hit with the listeners. Her late-night show caters to lonely hearts and Sulu in her husky, sexy voice helps them with problems related to the heart. She has a remedy for everyone, in her own unique style- be it a cocky cab driver in love with two sisters at the same time or the lonely widower who just wants to hum along with her- Sulu has the ability to connect with people across ages.

As her career soars, her personal life takes a dip as she is unable to juggle the two roles- that of a perfect housewife and another of the careerist woman- perfectly. Sulu’s supportive husband soon starts to get annoyed with her erratic working hours as he himself struggles at his decade-long comfortable job. Sulu’s son gets neglected at home and eventually gets caught in school selling adult CDs to classmates. And suddenly Sulu starts doubting herself and her ability as a homemaker and mother.

Tumhari Sulu’s high point is the simplistic story that resonates with one and all for its middle-class values and aspirations. The dreams are sometimes too big for our stature yet one never gives up easily. Sulu is a 12th fail, and is aware of her shortcomings even but yet has the zeal to attempt new things. Sulu is someone you already know in real life. She could be your next door neighbour or a relative or just like you- who wants to strive for something big and also balance her personal life while pursuing her dreams.

There are moments which will bring smiles to your faces because it is all too familiar. The car ac is not switched on too much to ‘secretly’ save fuel, the husband –wife discuss numerous business options that they could start but never do, the nagging relatives always taunt the youngest in the family to do something worthwhile in life. All these elements make the film very real.

The film, though, takes copious liberty in terms of its narrative. No media head has so much free time to indulge an aspiring applicant to rehearse and give spot audition. Getting a job is difficult; getting an interview is even tougher. But Sulu’s audition appears too easy. No one gets it so right on their first day on-air like they show in the film. Sulu has zero background in radio yet on her first day she appears like a pro.

While the first half is fun, breezy and real, the second half slowly gets melodramatic and unrealistic. I had major problems with the climax which was rather convoluted. But the glaring flaws can be ignored simply because of the pitch-perfect cast and its endearing performances.

Vidya Balan has time and again proven that if she is given a good script, she can shine and take the film forward on her own accord. Vidya’s Sulu is endearing, innocent and a whole lot of fun. She makes the ordinary housewife appear special. As her husband Ashok, Manav Kaul too delivers a fine performance and matches in every scene with Vidya. They look good together and make for a very convincing married couple. Then there is supporting cast which includes Neha Dhupia, Malishka and Vijay Maurya who are perfect in their respective roles. The conversations flow freely and things look so real that you almost feel it is happening to you.

Above all Tumhari Sulu makes the ordinary middle-class look extraordinary. Sulu will remind you of your mother who has tirelessly worked at home and at work for years without any complaint. Sulu’s problems will resonate with all working women who put in extra effort to strike a fine balance between home and work. And Tumhari Sulu will make you fall in love with Vidya Balan all over again. Because Vidya truly ‘sab kuch kar sakti hai’.