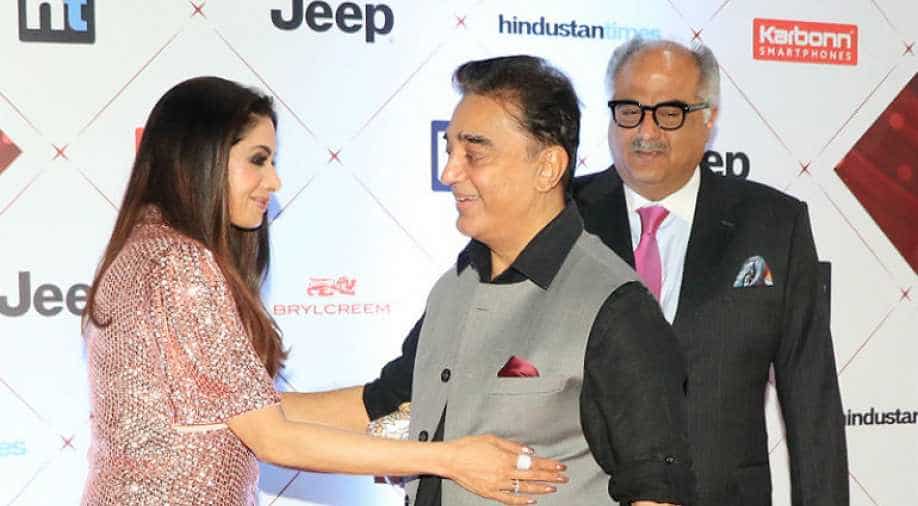 Kamal Haasan and Sridevi had a reunion of sorts at an award function recently. Photo by Yogen Shah Photograph:( WION )

They are actors par excellence and have featured together in one of the most beautiful love stories of all time. On Wednesday, Sridevi and Kamal Haasan revived Sadma memories as they met on the red carpet of an awards show.

The actor, dressed in a black kurta pajama and grey waistcoat, was posing on the red carpet when Sridevi and her husband Boney Kapoor walked in. The former co-stars greeted each other with a hug.

Sridevi and Kamal Haasan greeted each warmly at the red carpet as Boney Kapoor looked on. Photo by Yogen Shah (WION)

Sridevi wore a sequined outfit for the event. (WION)

Later, Sridevi even honoured Haasan with the Hall Of Fame award. " I am happy to receive the award from Sridevi, it was a big nostalgia trip.” Apart from Sadma, which was originally made in Tamil and was called Moondram Pirai, the two stalwarts have worked in several other Tamil films including Aadu, Puli Aatham, Aakali Rajyam and Satyavan Savithri.