As Dipak Misra demits office, a look at his historic judgements as CJI 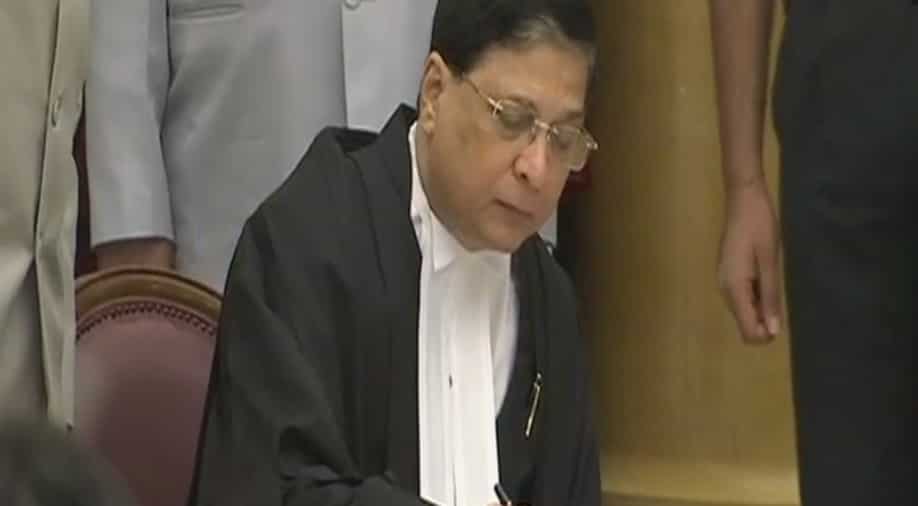 A majority of these judgments were passed in the last week of CJI's tenure.

Former Chief Justice of India (CJI) Dipak Misra will be remembered for pronouncing some of the historical judgements that have been pending for a long time. Justice Misra was the 45th CJI.

Justice Ranjan Gogoi will succeed him and will take over on October 3. However, the CJI's term also saw his brother judges in January publically criticising the functioning of Supreme Court and on 'selective assigning of cases'.

They also released a letter that they had written to the CJI to highlight the 'corrosion and compromise taking place within the institution of the judiciary and especially within the portals of the Supreme Court.'

The judges also had issues with regard to the assignment of the case pertaining to the mysterious death of Special Central Bureau of Investigation judge, Justice Brijgopal Harikrishna Loya, who was hearing the Sohrabuddin fake encounter case.

Later, in July this year, the bench headed by CJI Misra dismissed a review petition filed by the Bombay Lawyers Association seeking an independent probe into Justice Loya's death case.

The apex court said that the petition was frivolous and has been filed in a motivated manner to denigrate the judiciary.

Amid ups and downs, during his tenure of nearly 14 months, CJI Misra was part of the bench that delivered historical judgements including allowing the entry of women in Sabarimala Temple, the validity of Aadhaar and striking down of Section 377 and 497 of the Indian Penal Code (IPC).

A majority of these judgments were passed in the last week of CJI's tenure.

Here's a look at how things went on CJI Misra's tenure:

The 157-year-old law criminalised certain sexual acts, terming them as 'unnatural offences', punishable by a 10-year jail term. Criminalising gay sex is "irrational, indefensible and manifestly arbitrary", CJI Misra observed while delivering the verdict and adding that Lesbian Gay Bisexual Transgender (LGBT) community has the same rights as any other citizen.

He said that Section 377 was used as a weapon to harass people, resulting in discrimination.

On September 26, a five-judge Constitution bench, headed by CJI Misra upheld the Constitutional validity of Aadhaar but with caveats.

While the bench asserted that Aadhaar empowers the marginalised sections of the society, it ruled that Aadhaar Card cannot be mandatory for admissions to schools and colleges, mobile phone connections, opening bank accounts.

The bench added that the 12-digit unique identification number is needed for social benefit schemes and filing income tax.

The top court also asked the central government to introduce a strong data protection law as soon as possible.

The five-judge Constitution bench, headed by CJI Misra, refused to refer its 2006 judgement on quotas in promotions for Scheduled Caste and Scheduled Tribes to the seven-judge bench on September 26.

The court had earlier paved way for grant of quota for promotions in the government jobs to SC/ST while directing that the states were not required to collect "quantifiable data" reflecting the backwardness among these communities.

In an unprecedented move, the Supreme Court on September 26 allowed the live streaming of its proceedings in the cases that hold Constitutional importance.

Rendering the judgement, the bench, comprising of CJI Misra, Justice AM Khanwilkar and Justice DY Chandrachud allowed the live-streaming saying the move will bring "transparency and accountability" to the judicial process.

The apex court said a pilot project may be initially taken up for about three months by live-streaming only cases of national and Constitutional importance from Court Number 1 presided over by the Chief Justice.

However, certain sensitive cases like matrimonial or sexual assault cases, matters where children and juveniles are involved will be excluded.

The Supreme Court on September 27 decriminalised adultery by striking down Section 497 of the Indian Penal Code (IPC), terming it unconstitutional.

The five-judge Constitution bench, led by CJI Misra, in four separate but concurring opinions held that "adultery is not a crime", adding that Section 497 treats a married woman as the commodity of her husband.

The apex court observed that mere adultery cannot be a crime unless it attracts the scope of IPC's Section 306 (Abetment of suicide).

The top court also made it clear that adultery can be a ground for divorce."It's time to say that the husband is not the master of the wife. Legal sovereignty of one sex over other sex is wrong," CJI Misra opined.

On September 28, the five-judge Constitution bench removed all restrictions imposed by Sabarimala Temple with regard to the entry of women between the ages of 10 to 50.

Pronouncing the verdict, CJI Misra said that the ban in place violated Constitutional principles and that women's rights cannot be subverted as they are in no way less than men.

The court said that no physiological and biological factor can be given legitimacy if it doesn't pass the test of conditionality.

On the one hand, women are worshipped as Goddesses, but there are restrictions on the other hand, said CJI Misra while reading the judgement.

"Relationship with God can't be defined by biological or physiological factors," he added.

Upholding its earlier order of death sentence, the Supreme Court on July 9 dismissed review pleas filed by three of the four convicts in the Nirbhaya gang rape and murder case.

The verdict came after less than six years of five men and a juvenile gang-raping and brutally injuring a 23-year-old girl on a moving bus in Delhi and later dumping her on the road with her male friend. The girl succumbed to her injuries after 13 days of the incident.

A three-judge bench, headed by CJI Misra and comprising Justice Ashok Bhushan and R Bhanumathi, pronounced the verdict in the case.

The judgement came in response to a review petition filed by three death row convicts -- Mukesh Singh, Vinay Sharma and Pawan Gupta -- against the Supreme Court order of May 2017, which said that Nirbhaya's rapists and killers should be hanged.

In an unprecedented move, four Supreme Court judges -- Justices Chelameswar, Ranjan Gogoi, Madan B Lokur and Kurien Joseph -- on January 12 called a press conference where they said that they were compelled to act in such way because CJI Misra could not be persuaded to mend the ways of the court.

These judges had earlier written letters to the CJI on this issue. Justice J. Chelameshwar (now retired), who spoke on behalf of four other judges said the administration of the nation's top court was not in order.