Dilution of Article 370 will accelerate development, talks with Pakistan only on PoK: Naidu 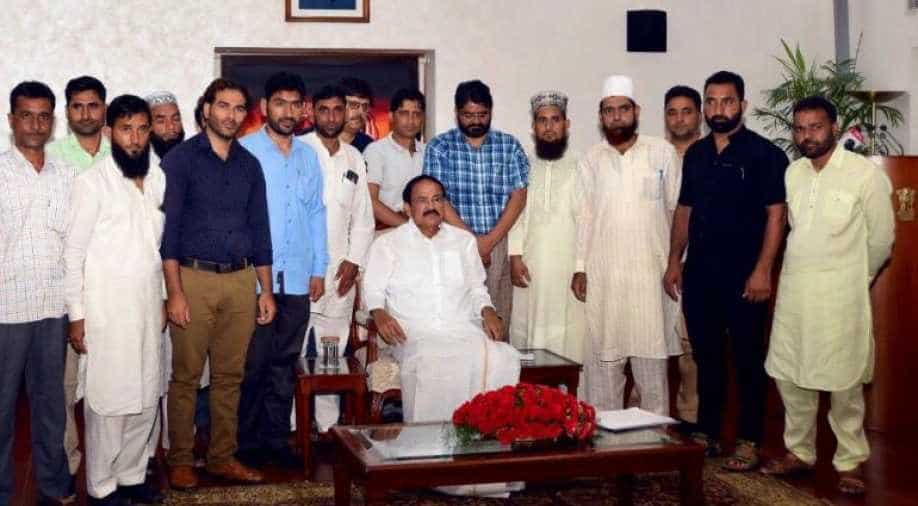 Vice President M Venkaiah Naidu in a group photo with the Village head (Sarpanches) from Jammu and Kashmir. Photograph:( ANI )

Referring to the holding of Panchayat elections under the Governor's rule in Jammu and Kashmir after a long gap, Naidu expressed his happiness that 74 per cent of the electorate voted and around 3,500 of the 4,483 Panchayats have been elected

Vice President M Venkaiah Naidu on Tuesday asserted that the dilution of Article 370 would accelerate the process of development in the Union Territories of Jammu and Kashmir and Ladakh and said any talks with Pakistan now would be held only on Pakistan-occupied-Kashmir (PoK).

"Abrogation of Article 370 paved the way for the extension of various schemes and legislations, including 73rd and 74th Constitutional Amendments to strengthen the funds and functions of local bodies," he said.

The Vice President was interacting with a delegation of Sarpanchs (Village Heads) and Panchs (Panchayat Members) from Jammu and Kashmir and told them that Article 370 was only a temporary and transitory provision in the Constitution.

"Talks with Pakistan would be held only on PoK, the safety, security and integrity of the nation are paramount for every Indian," he said, according to an official statement.

Referring to the holding of Panchayat elections under the Governor's rule in Jammu and Kashmir after a long gap, Naidu expressed his happiness that 74 per cent of the electorate voted and around 3,500 of the 4,483 Panchayats have been elected.

"With the dilution of Article 370, the Panchayats would now become more dynamic as the 3Fs - Funds, Functions, and Functionaries would be devolved to them. The financial power of Panchayats has also been increased by 10 times enhancing their financial powers up to Rs 1 lakh," he said.

He pointed out that the Panchayats were vested with powers to raise their own resources by increasing taxes. "The Panchayats are also now empowered to conduct an audit of schemes like ICDS and PMAY to improve the quality of delivery," he added.

Observing that greater devolution of funds, functions, and functionaries would enable the 3-tier administrative system to function more effectively, he said, Jammu and Kashmir was losing around Rs 4,000 crores for not conducting Panchayat elections as per the norms set by the 14th Finance Commission.

"Now that elections have been conducted, the funds recommended by the Finance Commission will start flowing. I am happy to know that Rs 500 crore have already been released and another Rs 3,000 crore will be released shortly. This will be a big game-changer for the Panchayat system," he said.

The Vice President also suggested that holding elections to local bodies every five years should be made mandatory.

"There should be no discretion or scope for the states to either postpone or advance them," he said.

Stating that effective local governance was key for better implementation of development and welfare initiatives and for better service delivery, he said that the funds allocated to the local bodies should go into the accounts of Panchayats, municipalities, and corporations and spent in accordance with the resolutions of the respective bodies.