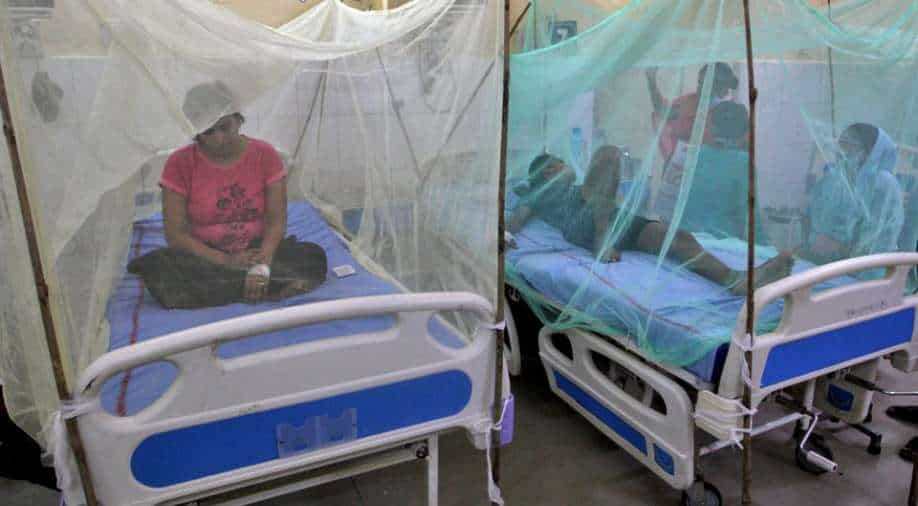 Dengue-infected patients sit under the mosquito nets after being hospitalised at a Hospital in India. Photograph:( Reuters )

The Indian government has dispatched high-level teams to nine states and union territories with significant dengue caseloads to assist them in public health efforts to prevent and manage the disease, a press release issued by the Ministry of Health and Family Welfare informed on Wednesday.

Haryana, Kerala, Punjab, Rajasthan, Tamil Nadu, Uttar Pradesh, Uttarakhand, Delhi, and Jammu and Kashmir are among the states with UTs, according to the announcement.

A total of 1,16,991 dengue cases are being reported by states and UTs across the country.

"It has been decided by the competent authority to depute central teams to the identified states to assist the state governments by providing technical guidance, including public health measures, for managing the ongoing outbreak of dengue," an office memorandum sent to principal secretaries (Health) and directors general of health services of the nine states and Union Territories.

As he evaluated the situation in Delhi and offered the Centre's full assistance, Union Health Minister Mansukh Mandaviya asked the Union Health Secretary to select and deploy a team of specialists to states with high active dengue cases.

Mandaviya presided over a high-level meeting with the Delhi administration to assess the public health measures in place to combat and treat dengue fever.

"On-ground initiatives like hotspot identification, fogging and timely treatment will be carried out to curb disease. The centre is also sending a team of experts to states with rising dengue cases," he said.

The minister asked Union Health Secretary Rajesh Bhushan to identify states with a high number of active cases and dispatch teams to them.

According to a ministry statement, these states' standard procedures will also be noted in the following review meetings.