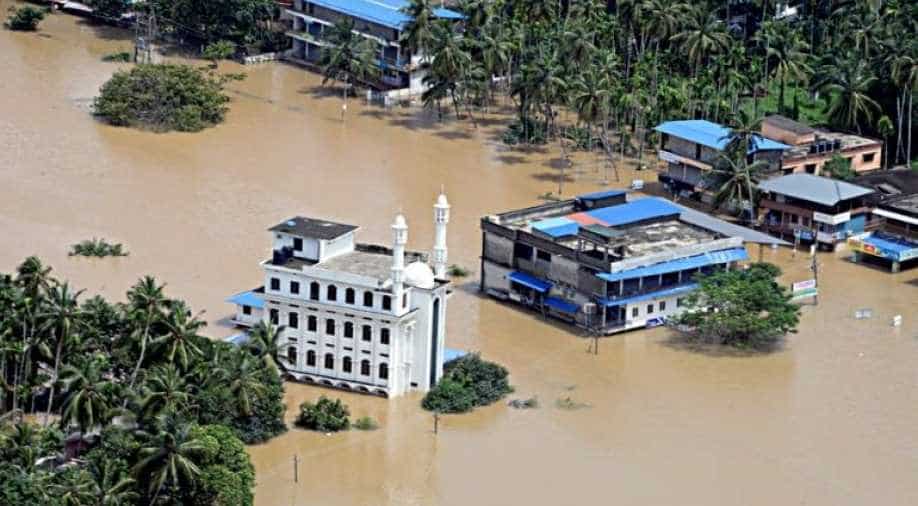 An aerial view of the submerged town of Malappuram as floodwater increases after incessant rainfall in Kerala. Photograph:( ANI )

Earlier, Chief Minister's Office tweeted that red alert has been issued for three districts and orange alerts for nine other districts.

The death toll in flood-hit Kerala has gone up to 91 with 59 still missing, Kerala State Disaster Management Authority (KSDMA) informed on Tuesday.

''91 deaths, 59 people missing, & 34 injured due to flood-related incidents across the state, between 8th August to 13th August,'' KSDMA said.

As many as 1,332 relief camps are currently operational in the state.

Earlier, Chief Minister's Office tweeted that red alert has been issued for three districts and orange alerts for nine other districts.

Alert: Forecasters predict heavy rains across most parts of the State. Red alert has been issued for 3 districts; Alappuzha, Ernakulam and Idukki. Orange alert issued for 9 other districts. #KeralaFloods pic.twitter.com/xMTvP48ibg

The India Meteorological Department (IMD) has predicted "cloudy sky with a few spells of rain or thundershowers" for the next five days in the state.

Kerala Chief Minister Pinarayi Vijayan has left from Thiruvananthapuram and will visit flood-affected areas of Wayanad and Malappuram later in the day.