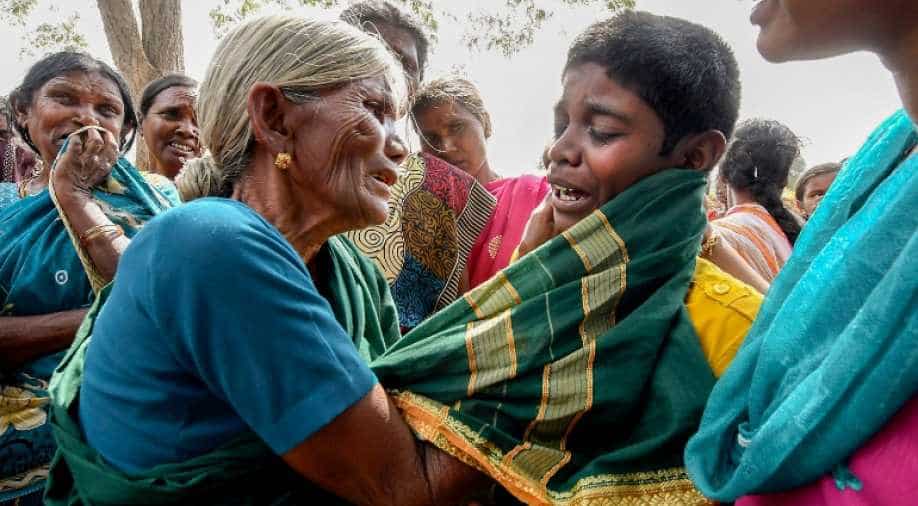 Family mourn death of their members after poisoning at Bidarahalli, near Sulawadi village in Chamarajnagar district of Karnataka. Photograph:( PTI )

The number of deceased in the incident have gone up to seventeen after the death of a 45-year-old man who undergoing treatment in hospital.

The death toll in Karnataka temple where devotees were admitted to hospital after consuming "prasad" in Chamarajanagar district escalated to 17 on Saturday.

The number of deceased in the incident have gone upto seventeen after the death of a 45-year-old man who undergoing treatment in hospital.

On December 14, 15 people had died and more than 100 others were hospitalised after consuming 'prasad' distributed at Maramma temple in Sulavadi village.

The police investigation revealed that a 52 year old seer who was in charge of the temple generating huge money for himself till 2017 directed a woman to mix poison in the prasad to defame the temple management.

The seer took the step after he was sidelined from the temple.

Police have arrested four people, including Salur Math seer Pattada Immadi Mahadeva Swami and his three accomplices, including a woman, on charges of murder, attempt to murder and criminal conspiracy.

On December 14, the two men had poured 15 bottles of pesticide in the prasad after sending away the cooks, the police said.

The cooks returned and noticed a bad smell. They misled the cooks by saying that it was smell of edible camphor added to the prasad.