Dealing with influx from Myanmar as per laws, humanitarian consideration: India 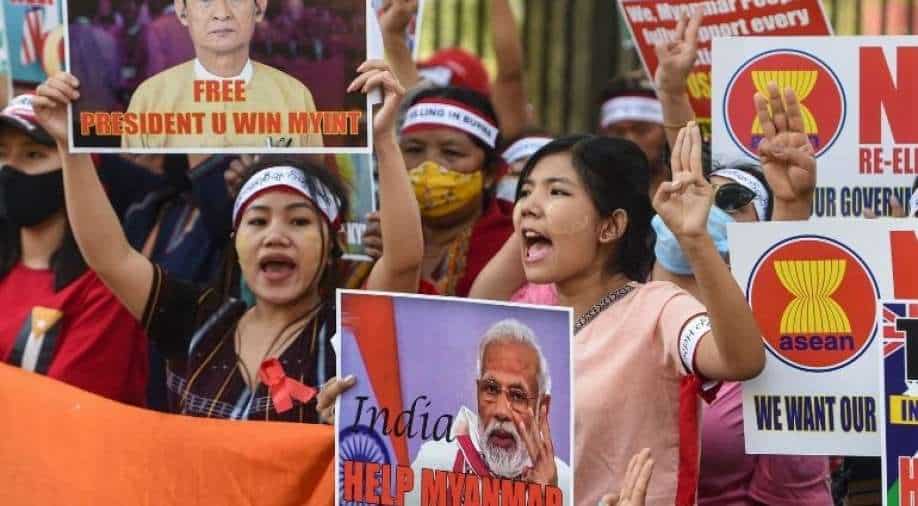 Myanmar refugees raise slogans during a protest against China''s support to the new military rule in Myanmar, at Jantar Mantar in New Delhi (FILE) Photograph:( PTI )

The situation in Myanmar has deteriorated in a major way, with an increased level of violence and deaths and internet shut down

Chief Minister of the Indian state of Mizoram Zoramthanga has called the centre to accept the incoming refugees from Myanmar, as many cross the international border. India is not a party to the UN Refugee Convention of 1951 and its 1967 Protocol and the issue is dealt with administratively by New Delhi.

In response to a number of questions on the situation in Myanmar, the new spokesperson of India's ministry of external affairs Arindam Bagchi said, "we condemn any use of violence. We believe that the rule of law should prevail. We stand for the restoration of democracy in Myanmar."

He reiterated New Delhi's stance, calling for "release of political prisoners" and extended support to "any attempts at resolving the current situation, including through the efforts of ASEAN", pointing further that, India has been engaging with its "international interlocutors and at the UN Security Council in an effort to play a balanced and constructive role."

The situation in Myanmar has deteriorated in a major way, with an increased level of violence and deaths and internet shut down. The issue has been discussed several times at the United Nations Security Council.

Asked about, Indian Defense Attache's (DA) presence at an event of Myanmar Military, the spokesperson said, "we have a functioning embassy in Myanmar. Our ambassador, defence attaché and other diplomatic officers continue to discharge their regular diplomatic responsibility. Nothing more should be read into this event" which saw Indian DA's attendance.