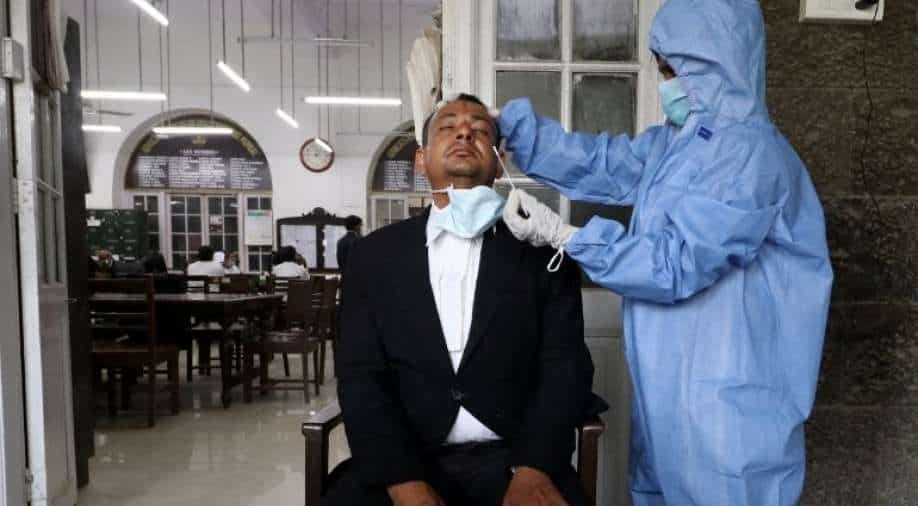 A healthcare worker collects a swab sample from a court employee during a rapid antigen testing campaign for the coronavirus disease (COVID-19), at a court in Mumbai, India, March 25, 2021 Photograph:( Reuters )

A grim milestone in India's fight against the coronavirus. On Monday, more than 100,000 cases of new infections were found, the highest single day figures for India since the pandemic began

From Pakistan to India and Bangladesh, a deadly second wave is sweeping through South Asia. All countries are reporting a record spike in cases. India reported more than 100,000 new infections in a day, becoming only the second country in the world after the United States to hit that mark.

A grim milestone in India's fight against the coronavirus. On Monday, more than 100,000 cases of new infections were found, the highest single day figures for India since the pandemic began.

At the beginning of the new year, India was breathing easy, but now it seems like the virus has come back with a vengeance even with vaccination.

Hospital beds are filling up fast and the restrictions are returning. The state of Maharashtra has accounted for nearly 60 per cent of all the new cases in the last two weeks. Reports say eight out of 10 worst affected districts are in Maharashtra. The state govt has announced a night and weekend curfew. Public spaces like parks, shopping malls and cinemas have been closed again.

India's neighbourhood is battling a surge too. Bangladesh has decided to impose a week-long lockdown after recording more than 7,000 new cases on Sunday. This is the highest daily count for Bangladesh. Only utility and emergency services will run for the next seven days. Factories can remain open but they will have to follow strict hygiene rules.

The second wave has swept Pakistan too. On Saturday, the country reported more than 5,000 cases.
Islamabad says this surge is worse than last year's wave. Pakistan has also become the first country to allow the commercial sale of vaccines. Russian made shot Sputnik V is now available in the open market. It has been priced at 12,000 Pakistani rupees or 80 dollars. A cost price that may keep the life- saving jabs out of the hands of the poor, who make up almost one fourth of Pakistan.

Beyond South Asia, Europe is struggling with a third wave of the pandemic. Many countries are reimposing lockdowns and restrictions. Last week, France announced its third national lockdown. Thousands of cops were seen on the streets of Paris on Monday, asking people to wear masks.

Those who broke the rules were fined on the spot.

In contrast is the United Kingdom, which is gradually opening up. New coronavirus cases have reduced dramatically in the UK, thanks to its vaccination programme.

After inoculating more than 47 per cent of its population with at least one dose, new infections are now down to just six per cent of the peak, that was reported in January. That's when the so-called UK strain had led to a big rise in cases.

Three months on, the British government is lifting lockdown restrictions. People can now meet outside and outdoor sports facilities have reopened. For the rest of the world, the writing is on the wall. It is critical to vaccinate large sections of the population to beat the surge, and it must be done sooner, rather than later.