WATCH: Dawood negotiating with the government to come back to India, claims Raj Thackeray

MNS leader Raj Thackeray in a speech said Dawood Ibrahim is negotiating a deal with the Indian government to come back to India. Photograph:( WION )

Maharashtra Navnirman Sena(MNS) leader Raj Thackeray said today that Dawood Ibrahim, prime accused in the 1993 Mumbai blasts, is negotiating a deal with the Indian government to come back to India.

"Dawood Ibrahim wants to come to India," Raj Thackeray said in a public speech in Mumbai.

"It is his own wish that he wants to come to India and die," the MNS leader added.

Mumbai police had arrested Dawood's brother Iqbal Kaskar along with his two aides on extortion charges two days ago. Kaskar was allegedly threatening a builder in Thane since 2013 and is said to have extorted Rs 30 lakh and four flats from the builder.

"It is Dawood's wish to come here while the government will claim that they got him to India," Thackeray asserted.

"The bomb went off a long back(1993 Mumbai blasts). If he comes, the government will be like see we got him. They will say that the Congress couldn't get him but we did," he claimed. 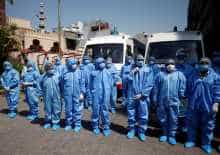