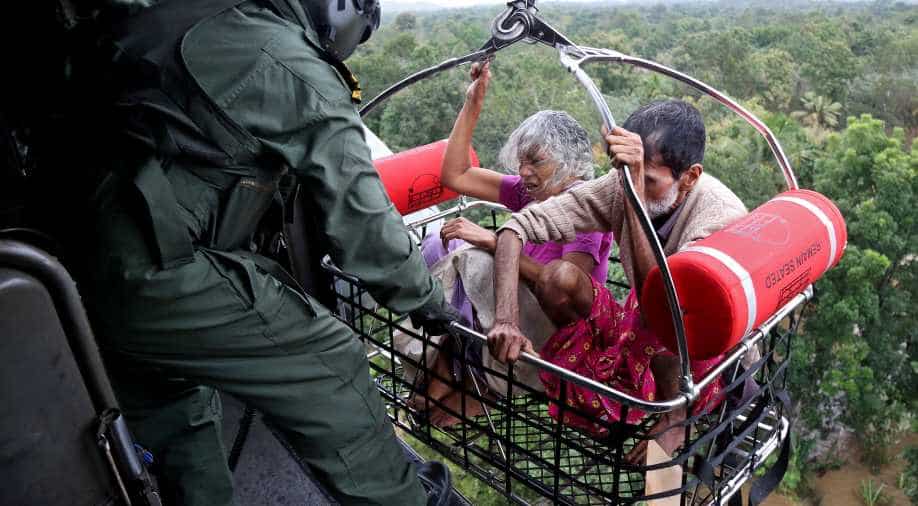 People are airlifted by the Indian Navy soldiers during a rescue operation at a flooded area in Kerala, August 17, 2018. Photograph:( Reuters )

The Centre has also launched massive rescue and relief operations as the flood situation is getting worse with each passing day in Kerala.

Army, Navy, Air Force, Coast Guard and National Disaster Response Force (NDRF) have been asked to mobilize additional manpower, boats and helicopters to scale up the rescue and relief operations.

Food packets and drinking water are also being rushed.

The Indian Railway, too, has extended a helping hand, with hundreds of wagon cars loaded with drinking water have been sent for those who have been badly affected by the rains and floods.

The Indian Navy rescued nearly 500 people on Friday, continuing with its massive rescue and relief operations.

According to officials, it is unprecedented in the history of rescue operations by the Navy as the flood situation continued to remain grim all across the southern state.

More than 3,000 people have been rescued since floods hit Kerala 10 days ago, an official spokesperson said.

The Southern Naval Command on Friday deployed a total of 58 rescue and diving teams with Gemini boats while 18 more teams were sent to various locations to augment the rescue effort.

"Some 500 rescued people have been accommodated at the T2 hangar inside the naval base, a make-shift relief camp, before shifting them to a relief camp at Fort Kochi. (On Friday), 310 people were rescued by the boats and 176 by aircraft," the spokesperson said.

The Army has joined operations to rescue people stranded due to floods and landslides in rain-battered Kodagu district bordering Kerala, officials said today.

All major roads leading to Kodagu are blocked and a massive rescue operation has been launched, they said.

Multiple agencies, including Army's one column of Dogra Regiment with 60 personnel, are involved in the operation.

The Army's Engineering task force, comprising 73 personnel with boats and other rescue equipment, is on its way to the area, officials said.

In order to rescue & move people from flood-affected regions to safer locations and relief camps, around 221 motorised and 7 non-motorised boats from @adgpi , @indiannavy & @IndiaCoastGuard have been deployed in Kerala as on date.#KeralaFloods @nsitharaman pic.twitter.com/QJtwJ6cm7F

Meanwhile, Women and Child Development Ministry is coordinating with the Air Force and Kerala government to deliver 100 metric tonnes of ready-to-eat food packets to the flood-affected children in the state, Union Minister Maneka Gandhi said today.

The floods, Kerala's deadliest in close to a century, have claimed 173 lives since August 8. According to sources, 106 people were killed in just one day yesterday.

"To aid distressed children stuck in this massive calamity, I have arranged 100 MT of ready-to-eat food. Have also assured the state government for more supplies," Gandhi said in a tweet.

Prime Minister Narendra Modi left for Kerala this evening to take stock of the flood situation there.

"Leaving for Kerala to take stock of the flood situation in the state," the prime minister tweeted.

"The suffering of the people of Kerala has been in his thoughts for the last few days. He will review the status of relief and rescue operations, and will also undertake an aerial survey of the flood-affected areas," the Prime Minister's Office said in a statement.