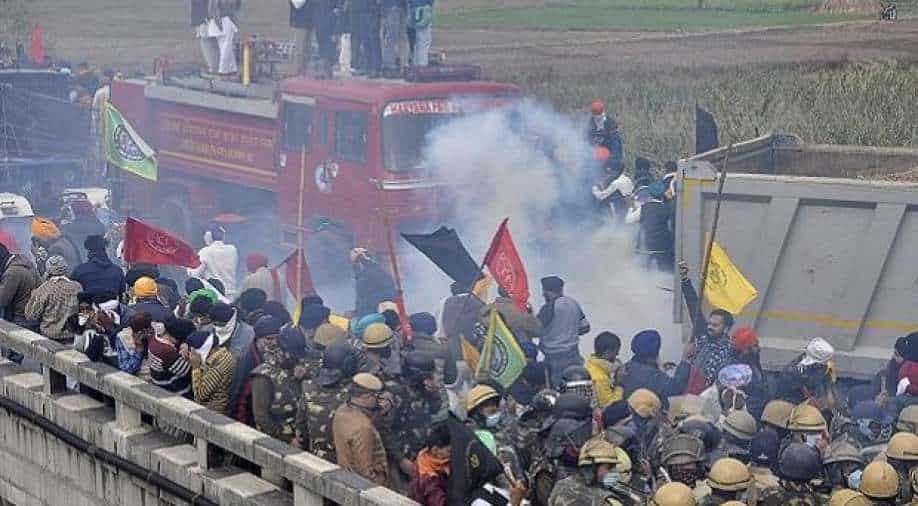 Police fire tear smoke shells to disperse the protesting farmers as they try to march to Delhi. Photograph:( Reuters )

Krantikari Kisan Union president Darshan Pal said that officials of the Union home ministry had allowed them a place at Burari in Delhi to hold agitation.

Union government has allowed farmers protesting against the Centre's farm laws to enter Delhi with permission to hold their agitation at the Burari ground.

Farmers faced tear gas and water cannons along the Delhi-Haryana border and clashed with police today as they marched towards the national capital as part of their 'Delhi Chalo' protest against the Centre's new farm laws.

The Delhi Police used tear gas shells to disperse a group of farmers who had reached the Singhu border, while at the Tigri border security personnel used water cannons to disperse farmers trying to enter the national capital.

He said that officials of the Union home ministry had allowed them a place at Burari in Delhi to hold agitation.

"I welcome Centre’s decision to allow farmers to enter Delhi to exercise their democratic right to protest. They should also now initiate immediate talks to address farmers' concerns on the #FarmLaws and resolve the simmering issue," he tweeted.