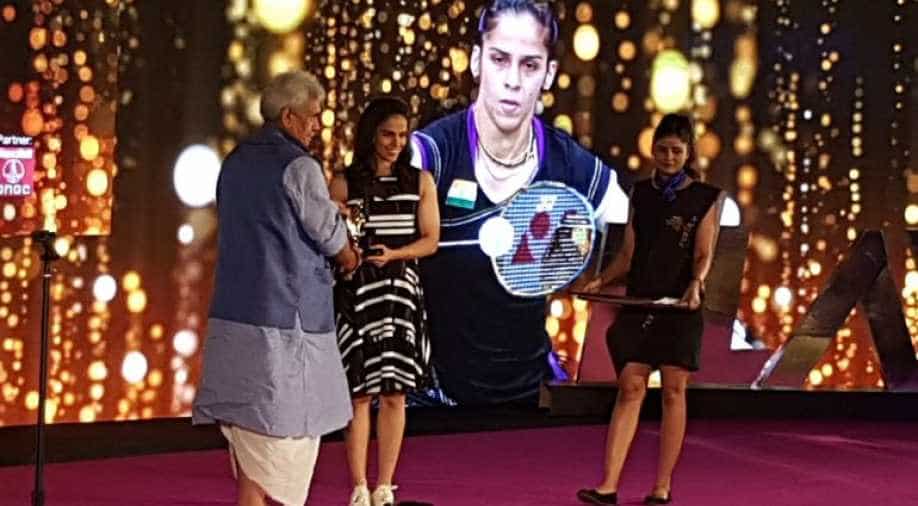 Smriti Irani, Manoj Sinha and Prakash Javadekar lauded the winners and pointed out India has changed a lot in the last few years.

"Women are coming forward in the sporting arena and it is a welcome development. It is a great sign for our country that our women athletes are winning on the world stage," said Irani.

Javadekar thanked Zee Media for the event and said that all the awardees have struggled a lot to reach the pinnacle of their sport. He added that their stories are an inspiration for the entire country.

Manoj Sinha and Anupriya Patel spoke about the hard work and tough training followed by the awardees. They expressed hope that all the athletes will continue to do well and bring more laurels for the country.

"Women athletes have to face a lot of discrimination and they are generally treated as being inferior to the men. But this is not the case. Our Prime Minister Narendra Modi is taking a personal interest in ensuring we do well in sports. We have launched Khelo India too. We have made a good beginning.

"It is great pleasure for me that Zee Media is felicitating sportswomen. Women are more powerful and dedicated than men. In our society, the men have always looked down upon women. But women are not weak. We will strive to bring more sportswomen forward," said Dr Chandra.

Anjali Bhagwat: The rifle shooter is the first Indian to win at the International Shooting Sports Federation (ISSF) Champion of Champions combined-air-rifle event when she emerged victorious in the 2002 edition. Anjali was the World Number One in 10m Air Rifle in 2002 and won her first World Cup Final in Milan, in 2003.

Anjali has represented India in three consecutive Olympics. She was a wildcard entry in the 2000 Sydney Olympics but reached the final, a first for an Indian women shooter. She dominated Commonwealth Games in the 10m Air Rifle and Sports Rifle 3P events and won 12 gold and four silver medals. She has won 31 gold, 23 silver and seven bronze medals in international competitions.

Saina Nehwal: The 28-year-old is a household name and synonymous with women badminton in the country. She is a former World Number 1 and has represented India in three Olympics - Beijing 2008, London 2012 and Rio 2016. She won the bronze medal at the London Olympics. She has over 23 international titles in her kitty. The government has honoured her with the Rajiv Gandhi Khel Ratna, Arjuna Award and the Padma Bhushan.

She represented India in three Olympics - 2008 Beijing, 2012 London and 2016 Rio. The government has conferred on her the Arjuna Award, Padma Shri, Rajiv Gandhi Khel Ratna Award and Padma Bhushan.

PV Sindhu: Another Hyderabad link to women sports, Pusarla Venkata Sindhu is the second badminton player after Saina to achieve success on the world stage. She won the silver medal at 2016 Rio Olympics, a first for an Indian woman. She and Saina are the only two Indian badminton players to ever win an Olympic medal. She has been consistently ranked among the top five women badminton players in the world and has defeated every top-ranked player.

Deepa Malik: She is the first Indian woman to win a medal in Paralympic Games when she bagged a silver medal at the 2016 Rio Paralympics in the shot put. She also has a gold medal in F-53/54 Javelin event at the para athletic Grand Prix held in Dubai in 2018. Coming from the defence background - her father is Colonel (retd) BK Nagpal and husband is Colonel Bikram Singh - she is currently the World Number one in F-53 category. She has been honoured with the Arjuna Award and Padma Shri.

Dipa Karmakar: She is the first Indian women to represent the country at an Olympic Games in gymnastics when she took part in the 2016 Rio Games. The girl from Agartala is also the first Indian gymnast to do so after the 1964 Tokyo Olympics. She finished a credible fourth in Women's Vault event at Rio. Dipa Karmakar is one of the only five women who has successfully landed the Produnova, the most difficult vault currently performed in women's gymnastics. She has been honoured with the Rajiv Gandhi Khel Ratna Award and Padma Shri.

MC Mary Kom: Mangte Chungneijang Mary Kom has achieved what no other Indian sportsperson has. The boxer from Manipur is a five-time World Amateur Boxing champion. She is also the only woman boxer to have won a medal in each one of the six world championships. She won a bronze medal at the 2012 London Olympics in the flyweight (51 kg) category. She was nominated by the President of India as a member of the Rajya Sabha on April 26, 2016. She has been honoured by the Padma Bhushan, Arjuna Award, Padma Shri and Rajiv Gandhi Khel Ratna Award. Karnam Malleswari: The former Indian women weightlifter is the first in the history of Indian Olympics to win a medal. The woman from Andhra Pradesh received the Rajiv Gandhi Khel Ratna Award in 1995 and Padma Shri in 1999.

Krishna Poonia: Born in Haryana's Agroha village in 1982, Krishna Poonia is a discus thrower. She won the bronze in 2006 Doha Asian Games and gold in the 2010 Delhi Commonwealth Games. She has been honoured with Padma Shri in 2011. She has represented India at the 2008 Beijing Olympics and 2012 London Games.

Sunil Dabas: Not a very popular name, Sunil Dabas's contribution in no less. She has coached the Indian national female Kabbadi team. Her team has won gold medals in the 2010 Asian Games and the 2012 World Cup 2012.She was hounored with the Dronacharya Award in 2012 and Padma Shri in 2014.

Indian Women Cricket Team: From the time India's women's cricket came under the wings of BCCI, the team has turned a new chapter of success. The Indian team ended up runners-up in the 2017 World Cup in England, losing the final by a narrow margin. Recently, India won the T20 series 3-1 in South Africa and players such as Mithali Raj, Jhulan Goswami, Harmanpreet Kaur and Smriti Mandhana became role models for many a young player. Mithali has also been the highest runscorer in ODI cricket. Harmanpreet and Mandhana have showcased their talent in the Australian Big Bash League too. Harmanpreet has impressed the Aussies with his six-hitting ability.

Indian Women Hockey Team: Led by Rani Rampal, the hockey team recently lifted the Asia Cup for the first time after 2004. While they might still struggle at the world stage, the Indian team has been unparalleled in the Asian circuit. In 2016, the team won their first Asian Champions Trophy and finished the season on a strong note. In the last Asiad, the team won the bronze medal. The team has won gold in the 2002 Commonwealth Games, ended runners-up in 2006 and finished in top five in 2010 and 2014. With the FIH World Cup going to be played later this year, the in-form team has qualified and are touted as a strong contender.