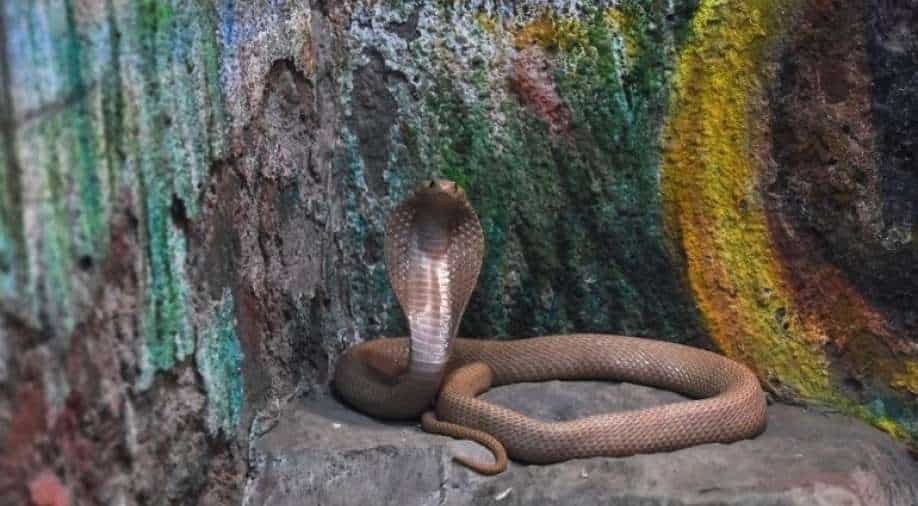 A venomous spectacled cobra, also known as Indian cobra (Naja Naja) or white cobra, is seen near a painting inside its enclosure at the Kamla Nehru Zoological Garden in Ahmedabad on January 30, 2019. Photograph:( AFP )

A charity worker from Britain in India went through a lot. After surviving COVID-19, dengue, and malaria, Ian Jones did not expect any more hurdles. But then, he was bit by a deadly snake in the Indian state of Rajasthan

How much can a person take? Apparently, a lot!

A charity worker from Britain in India went through a lot. After surviving COVID-19, dengue, and malaria, Ian Jones did not expect any more hurdles. But then, he was bit by a deadly snake in the Indian state of Rajasthan.

An Indian cobra bit Jones in the Jodhpur district of Rajasthan, after which he underwent treatment at a hospital in Jodhpur city, which is 350 kms away from the state capital Jaipur.

Initially, doctors suspected that he was also carrying COVID-19, for which he later tested negative.

"Jones came to us last week after a snake bite in a village in the region. Initially it was suspected that he is also Covid-19 positive (for the second time) but he tested negative for that," doctor Abhishek Tater, who treated him at the local Medipulse Hospital, told AFP on November 21.

The doctor spoke about the symptoms exhibited by Jones after the snake bite. "While with us, he was conscious and had snake bite symptoms including blurring of vision and difficulty to walk, but these are generally transient symptoms," Tater added.

He was discharged soon after, and the doctor believes there won’t be any “long term effects”.

“If he hasn't already improved, he'd do so within next few days," the doctor told AFP further. Additionally, the doctor pointed out how common snake bites are in rural parts of the region.

His son, Seb Jones has set up a GoFundMe page to help pay for medical bills, and to facilitate his travel back to England.

On the page, his son’s statement read as follows: "Dad is a fighter, during his time out in India he had already suffered from malaria and dengue fever before Covid-19”.