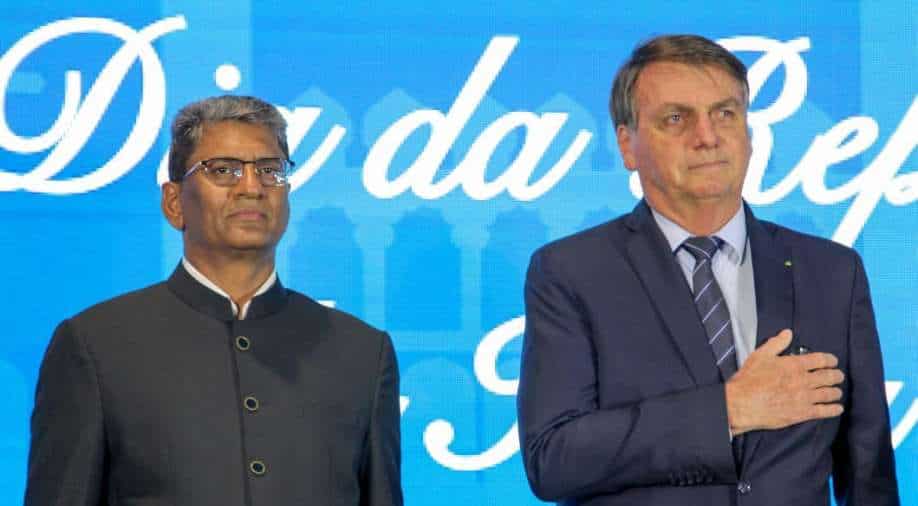 Bolsonaro at India's Republic Day celebrations in Brasília Photograph:( Others )

Recalling how 'India assisted with inputs' during the COVID-19 pandemic, Bolsonaro pointed out, 'India has also lived up to all of the agreement and the commitments that were undertaken towards Brazil in the course of 2020'.

It is also a significant departure from usual protocol because usually Presidents, and Prime Ministers, especially of large countries don't go to national day events organized by embassies.

Recalling how "India assisted with inputs" during the COVID-19 pandemic, Bolsonaro pointed out, "India has also lived up to all of the agreement and the commitments that were undertaken towards Brazil in the course of 2020". New Delhi had sent HCQ and paracetamol to the country last year during the pandemic.

The Indian envoy to Brazil, Suresh Reddy told WION, "The two countries have realised the potential to deepen the economic and commercial partnership which is also being reflected in the growth in bilateral trade and the increasing presence of Indian companies in Brazil and from Brazil in India."

"The presence of a large number of congressmen also reflected the bipartisan support to this dynamic India-Brazil partnership and increasing diversification of the engagement from energy to defence from ethanol to tourism", envoy Reddy explained to WION.

Interestingly, chief of naval forces, joint chief of staff were present on the occasion. The presence of the senior defence personnel shows the increasing engagement at a strategic level in the face of common challenges.

Last week India had sent a commercial supply of 20 lakh doses of India-made COVID-19 vaccines. Bolsonaro was quick to thank India and the Indian Prime Minister, tweeting an image of Lord Hanuman bringing the "Sanjivani booti" from India to Brazil. Sanjivani Booti (herb) is the medicine Lord Hanuman delivered for Laxmana, the legendary warrior and brother of Lord Rama when he was injured in battle in the Indian epic Ramayana. But in Bolsonaro's tweet, the "Sanjivani Booti" is the COVID-19 vaccine.