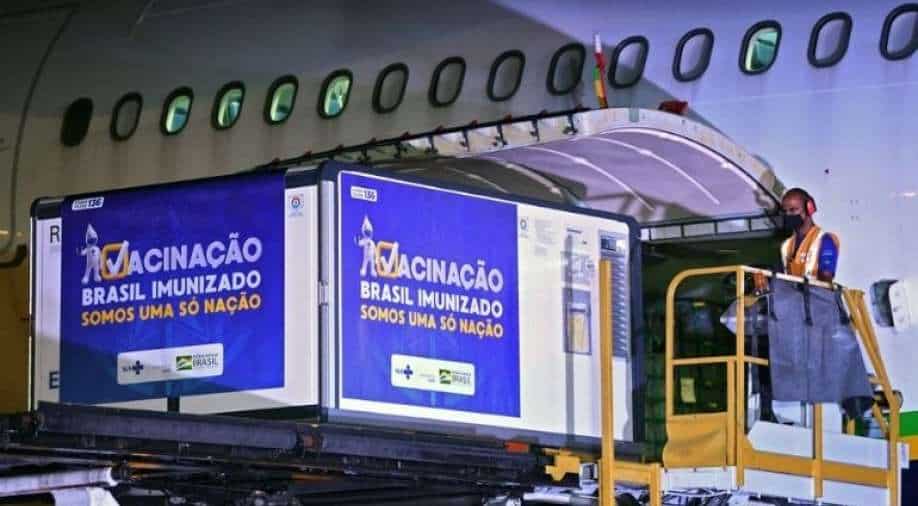 Containers carrying doses of the Oxford/AstraZeneca vaccine with a banners reading “Vaccination. Brazil immunized. We are an only nation” are unloaded from a cargo plane that arrived from Sao Paulo at the Galeao airport, in Rio de Janeiro, Brazil Photograph:( Reuters )

Pazuello's announcement came as Brazil's pandemic death toll approached 230,000 and with a new variant of the virus in the city of Manaus proving to be devastating in a second wave now hammering the jungle city

Brazilian Health Minister Eduardo Pazuello on Friday (February 5) said the South American country was in negotiations with India and Russia to buy an additional 30 million coronavirus vaccines as the country grapples with one of the world's worst Covid-19 outbreaks.

Pazuello's announcement came as Brazil's pandemic death toll approached 230,000 and with a new variant of the virus in the city of Manaus proving to be devastating in a second wave now hammering the jungle city.

While the federally-funded Fiocruz biomedical centre is still awaiting supplies to begin bottling doses of the AstraZeneca vaccine, the Butantan Institute has begun finishing and selling doses of CoronaVac to the Health Ministry.

The South American country on Thursday had registered 9,396,293 total confirmed cases and 228,795 deaths from the virus. It was the third day in a row Brazil reported over 1,200 coronavirus deaths.

India is also exporting doses, including commercial shipments to Brazil and Morocco, and free shipments to the Maldives, Bhutan, Bangladesh and Nepal.

Brazil's government has a deal with AstraZeneca to produce up to 100 million doses of its vaccine locally at Rio de Janeiro's Fiocruz Institute, but the delivery of the active ingredient needed to manufacture them has been plagued by delays from China.

As a result, AstraZeneca agreed to supply the government with 2 million ready-to-use doses made in India. After a major diplomatic effort, that included a letter from Brazil's President Jair Bolsonaro to Indian Prime Minister Narendra Modi, those shots arrived on Friday.

Bolsonaro had previously decried the Chinese shot as being useless, but his government is becoming increasingly reliant on it to tame the world's second most deadly coronavirus outbreak after the United States.

The far-right former army captain is under growing pressure for his handling of the rollout, which has been plagued by delays and a lack of vaccines, just as a brutal second-wave gathers steam.