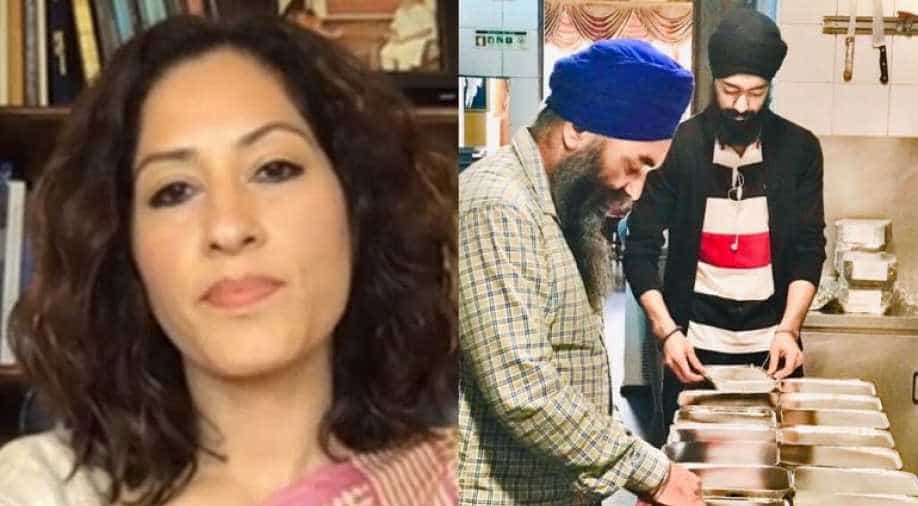 Many of them didn't have food or shelter. We had stranded Indian students and seafarers, people who were on a cruise ship that is currently anchored in Lisbon.

India's envoy to Portugal has lauded the "very courageous and very generous people" from the Indian Sikh community who "bravely" went to quarantine centres to deliver supplies to Indians quarantined.

Speaking exclusively to our Principal Diplomatic Correspondent Sidhant Sibal from Lisbon, India's envoy to Portugal Nandini Singla said, "volunteers in the Indian community we were able to arrange free food and deliver food kit rations to more than 1800 stranded Indians".

Hundred Indians were quarantined in the country and 55 Indians tested COVID-19 positive, all of whom have recovered. India is in the process of planning a special flight from Lisbon to Goa to bring back around 190 Indian seafarers stuck in a cruise liner. India has also sent 15 tonnes of protective items to Lisbon from Banglore, other than providing 2.5 million tablets of HCQ.

WION: How have both the countries working together?

Nandini Singla: Both India and Portugal have been cooperating very closely. In fact, our 2 PMs spoke on May 5 and Portuguese PM thanked our PM for repatriation of Portuguese Citizens.

He also congratulated our PM for the success they had, even as a large and populous country in containing the Pandemic. Both PMs continued to work together and support each other.

India, for instance, waved the export ban, on 2.5 million tablets of HCQ at Portugal's request. We also had 15 tons of protective items like gloves being flown in from Bangalore.

As far as Portugal is concerned, the country's health service, the local authorities, the red cross, they have been outstanding in the support to the embassy in terms of taking care of Indians impacted by COVID, Indians who had to be quarantined in schools etc.

They have been incredibly supportive and at a policy level, the Portuguese govt announced that all visas and work permits will be automatically extended till the end of June and every foreigner in Portugal will be treated by like Portuguese citizens in terms of health care and other facilities.

This has been very welcome to many Indians whose visas have expired and they were anxious if they can go to a public hospital for treatment. Both countries are working very closely, and if I may add, we have also agreed to do joint research on COVID and we plan to anchor a youth hackathon on the theme of COVID.

WION: How has the Indian mission reached out to stranded Indians?

Nandini Singla: We have an Indian diaspora that is 1.2 lakh strong, it Includes economic migrants, people who work on agriculture farms, in the construction industry many such workers were left jobless because of the pandemic.

Many of them didn't have food or shelter. We had stranded Indian students and seafarers, people who were on a cruise ship that is currently anchored in Lisbon.

We had a large number of Indians here and with the support of the Gurudwaras, the Sikh community, the Indians diaspora, many volunteers in the Indian community we were able to arrange free food and deliver food kit rations to more than 1800 stranded Indians so far.

We have also arranged shelter for those who needed, so all the Indians who were stranded or distressed are being fully taken care of and an important thing we realised, it is the importance of communication itself.

Because we were getting many anxious questions and people calling and worried about when they can go back home, what health advice and precautions to follow and pleased to share with you since the pandemic began we have answered 3000 phone calls on 24/7 emergency helpline.

We have responded to 2000 messages on emails, WhatsApp, Facebook and Twitter. Just last week, we have sent 1100 messages. We are also uploaded audiovisual messages because that is easy to connect especially with the workers who are in a different part of Portugal.

We have given different advisories, reassuring words and messages to the diaspora here and happy to tell u, no casualties so far, although 55 Indians tested positive and they have all recovered. All Indians are healthy, thriving and doing well.

WION: Any details on the repatriation?

Nandini Singla: We have more than 250 people who have registered with the Indian embassy for repatriation. They want to go back to India and a large part of this is crewmen, seafarers who are on board a cruise liner ship.

They are 191 of them and we got anxious calls from our seafarers that they do not have the mask, they were not sure about being tested, not having quarantine facilities.

We reached out to the cruise ship company and they were very responsive and we now have wifi facility and Indian food being given to our seafarers who are on board the ship.

They are happy and well taken care of but they want to go back to India. We are in touch with Indian authorities for a special flight from Lisbon to Goa because a lot of the seafarers are from Goa. Govt of Goa has expressed its willingness to receive them and we are waiting for scheduling for a special flight by Air India and we hope to have some good news soon.

WION: Anything to learn from Portugal? How has been the ground situation?

Nandini Singla: Portugal has been a success story as you may have heard. They have only about 1231 deaths as of today which is less than 1/5 of per capita mortality rate in the neighbouring country Spain.

Less than 65 per cent of Portugal's hospital bed capacity has been used and the recovery rate, people recovering from infection has risen steeply signalling normalcy can be expected soon.

So, Portugal is recovering very rapidly, and we have now the second phase of the easing of the lockdown which began on Monday. The 3rd phase will begin on June 1 if everything goes well.

So the situation in Portugal is looking good, as far as best practices from Portugal, I think India and Portugal have adopted similar models based on science and empirical data. Both countries heeded early signs and took decisive steps to have the firm and timely lockdown measures.

People of 2 countries also complied and both governments have announced generous economic packages to help the jobless and revive the economy. I would say both countries have followed similar tracks and they seem to be based on sensible best practices.

As far as distinct things India can pick up, size and population of both countries is vastly different, I am not sure if it will be comparable in terms of the scale of the 2 countries.

WION: How have the Indian diplomats been faring? Has it been tough?

Nandini Singla: Even for Indian embassies and diplomats, this has been a time of adaption and change and we are very lucky that in Portugal some of us could work from home, some of us came to office.

We made sure all services continued, for example, all consular services are being delivered by the embassy by post and in case of emergencies, it is delivered physically. We had a very generous pharma company, Generis which is a subsidiary of Aurobindo pharma, they came forward to provide masks and sanitizers at a time when they were not available in any pharmacy in Portugal.

WION: How has the Indian community helped in the mission's efforts?

Nandini Singla: I don't think, the embassy would have been able to reach out to needy Indians, the way it has, had it not been the Indian community. I would like to place on record, the special thanks to the Sikh community, and the Gurudwaras for doing a fantastic job of helping us reach food and essential supplies to people who needed them.

In fact, while I mentioned 55 Indians tested positive, there were more than hundred who were quarantined by the local authorities in schools etc and these people had nothing with them, so the embassy had to supply things like footwear, Indian food, shampoo, stuff like that.

No one was willing to go there because the place was quarantined. Very courageous and very generous people from the Indian community bravely went there and delivered the embassy supplies.

It was 350 km away from Lisbon, the embassy was in no position to go there and I would like to salute these members of the Indian community and call them COVID-19 warriors who rose to the occasion and helped the Indian embassy in the time of need.