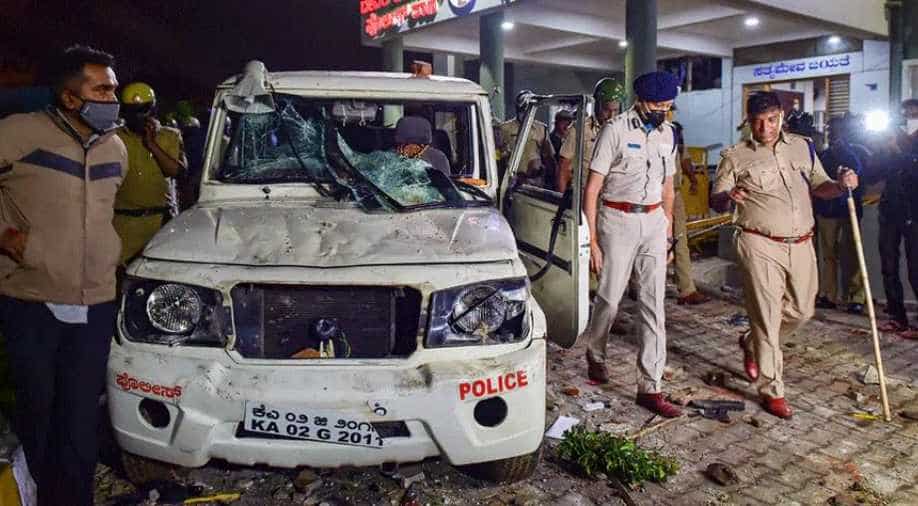 The Bengaluru Police have arrested a local SDPI leader Muzammil Pasha for allegedly inciting the riots in the city. Photograph:( Zee News Network )

110 persons accused of arson, stone-pelting and assault on the police have been arrested in connection with the violence.

Three persons were killed while many others were injured in a police firing after rioters attacked policemen and torched vehicles over an offensive online post in Bengaluru on Wednesday.

110 persons accused of arson, stone-pelting and assault on the police have been arrested in connection with the violence.

"I think it was a planned riot. Within an hour of a post on social media thousands of people gathered & damaged 200-300 vehicles & MLA's residence. We'll take serious action. It was an organised incident. SDPI is behind it," said Karnataka Minister CT Ravi.

Former Karnataka Chief Minister Siddaramaiah has demanded immediate arrest of those who instigated the violence.

"The riots at Kavalabhairasandra last night and the riot that triggered it were both reprehensible. I appeal to both Hindu and Muslim communities to act with restraint and maintain peace," he tweeted.

"Immediate arrest and prosecution of the evildoers who instigated riots and responded with violence. I have informed the Bangalore Police Commissioner. Our party is fully cooperating to the state government's attempt to establish peace," Siddaramaih said in another tweet.

He said that the attack on the police station is reprehensible and the police should act promptly and take action against the guilty.

The police said that accused Naveen has been arrested allegedly for posting derogatory material on social media. Residence of Congress MLA Akhanda Srinivasamurthy was also attacked after the violence broke out.