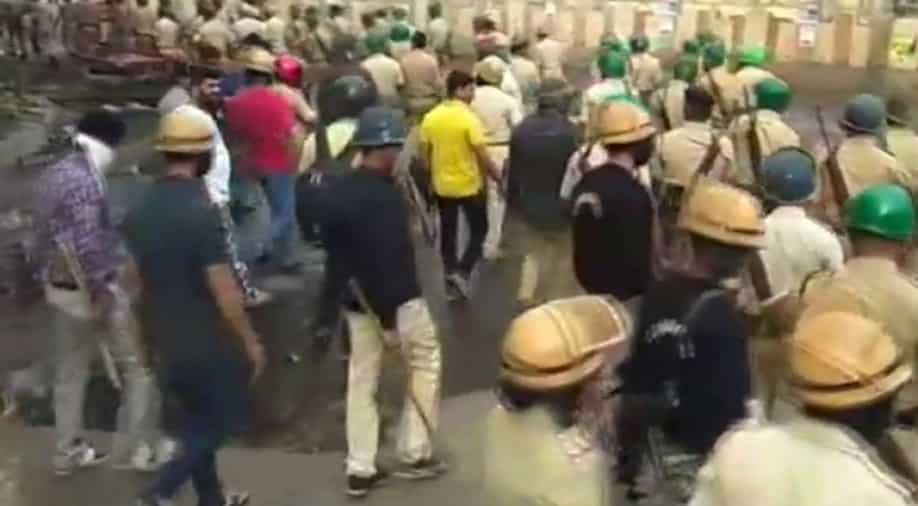 Section 144 (prohibits assembly of more than 4 people in an area) has been imposed in the city. Photograph:(ANI)
Follow Us

Taking a dim view of clashes in Maharashtra's Aurangabad district that claimed two lives, the Shiv Sena today dubbed it as a "communal" and "pre-planned" act of violence.

It rapped the state Home department, headed by Chief Minister Devendra Fadnavis, over the security lapses and failing to appoint a police commissioner for the city which is considered a "highly sensitive" area.

Two persons - a 65-year-old man and a 17-year-old boy - were killed in clashes on Friday night between groups of two communities over illegal water connections in the city, located in the Marathwada region.

"It is clear that the riots were communal and not some clashes between two groups. The way petrol bombs were used within the first 15 minutes of riots is enough to conclude that it was pre-planned attack," the Sena in an editorial in party mouthpiece 'Saamana'.

The post of the commissioner of police in Aurangabad has been lying vacant since some time, despite the city being one of the "highly sensitive areas" in the state, it noted.

According to the police, the violence also left more than 60 people, including police personnel, injured. Around 100 shops were also set on fire and more than 40 vehicles destroyed.

The Sena mocked the reasons that have come to light -- like drive against illegal water connections, a quarrel over an exchange of mobile phone at a garage, removal of illegal 'paan' shops, and the alleged beating of a customer who complained to a shop owner for selling rotten mangoes -- for the possible trigger behind the violence.

Such incidents should not be the cause of riots, the BJP's bickering ally said, adding that "the riots are a proof of the collapse of the security agencies' network."

The Marathi daily said the image of Maharashtra was already dented by the Koregaon-Bhima violence in Pune district, where Dalits were targeted on January 1 this year.

Besides, there were two major incidents of "double murders" in Ahmednagar (of two Shiv Sena leaders and as many NCP workers last month) and still the chief minister claims the situation is under control, the Sena quipped, adding that the high-powered committees set up for probe in such cases were of no use.

"The rioters set ablaze the entire Shahganj Peth (a market area in Aurangabad). Hundreds of houses and several vehicles were set on fire or damaged and a senior citizen lost his life. How come some people act so blatantly?," it asked.

"It looks like the law and order does not exist in Maharashtra," the Sena said.

During the Koregaon-Bhima violence, no policeman opened fire or baton-charged the rioters. On the other hand, in the absence of a police commissioner, the cops in Aurangabad fired at the mob, it said, adding that this was "suspicious".

"We are not interested in whether it was a communal riot or not. It is the state's responsibility to find out why the violence happened. But, the incident has shown that certain areas in the city are equipped for such riots," the Sena publication said.