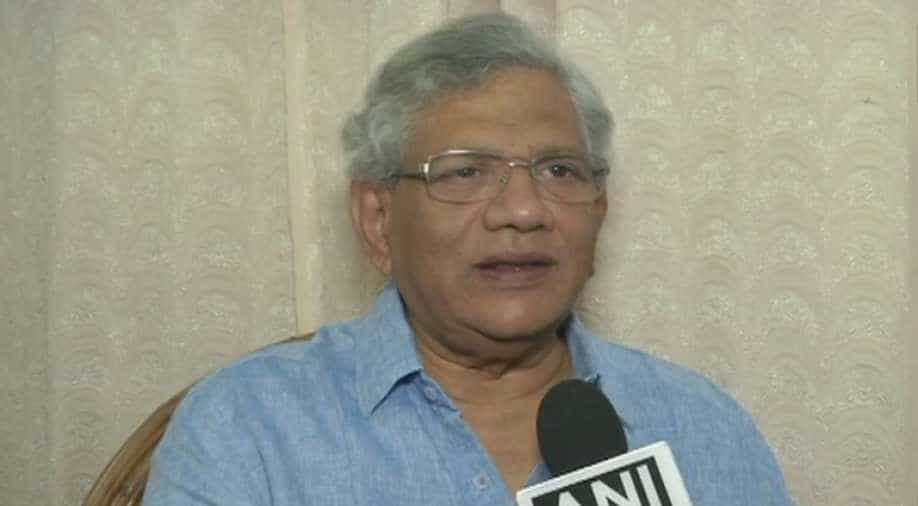 CPI(M) leader Sitaram Yechury said the situation in Tripura was such that a free and fair election was not possible. Photograph:( ANI )

The CPI (M) leader alleged that even though their party cadre was 'under constant threat', the Election Commission (EC) had refused to postpone the elections in Tripura till normalcy was restored

A day after the CPI (M) withdrew from the election to the Charilam Assembly seat in Tripura, alleging post-poll violence, CPI(M) leader Sitaram Yechury said the situation in Tripura was such that a free and fair election was not possible.

Sitaram Yechury alleged that an "atmosphere of terror is widespread" in Tripura and that people were not venturing out of their homes to buy their daily requirements.

"The Our party cadre are under constant threat. Till you restore normalcy Charilam election should be postponed but EC refused. So in that situation it will be exposing more of our people for more harm. This is anti-democratic and this election will be a farce," Sitaram Yechury said.

Charilam goes to polls on March 12.

Polling to the Charilam seat was postponed a week before the February 18 elections following the death of CPI(M) candidate Ramendra Narayan Debbarma.

The party had later fielded Palash Debbarma from the seat.

Palash Debbarma was pitted against BJP leader and newly appointed Deputy Chief Minister Jishnu Debbarman, who is not a member of the 60-member Tripura Assembly. The Congress has nominated Arjun Debbarma from the seat.

The BJP-IPFT alliance had won the polls with a two-thirds majority in the Assembly. The BJP had bagged 35 seats, while the IPFT won eight of the 59 seats that went to polls.