At least 11 dead, over 50 hospitalised after consuming prasad at a temple in Karnataka 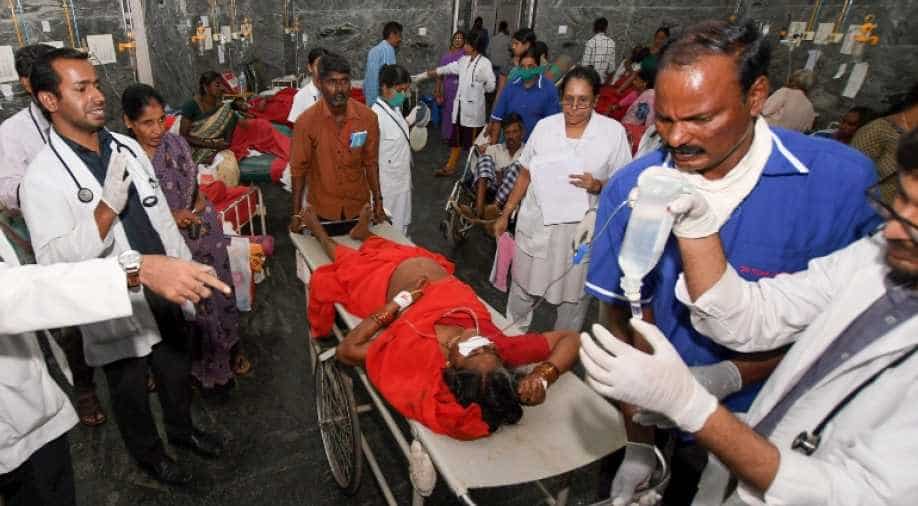 A woman is shifted to a hospital in as she complained of sickness after consuming 'prasad' at Maramma temple in Chamrajanagar district. Photograph:( PTI )

The district health officer said that poison might have gotten mixed with the 'prasad', which eventually lead to this tragedy.

At least 11 people have died and over 50 were hospitalised on Friday after consuming 'prasad' at a temple in Karnataka, the Chamarajanagar Superintendent of Police, Dharmendra Kumar Meena said.

The ill-stricken people were admitted to various hospitals in multiple locations in Chamarajanagar and Mysuru district.

The district health officer said that poison might have gotten mixed with the 'prasad', which eventually lead to this tragedy.

“It is suspected that the prasad was laced with poison. A team would be constituted to conduct a probe. The samples of the Prasad have already been sent to the lab. The exact reason would be ascertained only after receiving the reports," Chamarajanagar Deputy Commissioner B B Kaveri said.

Chief Minister H D Kumaraswamy announced an initial compensation of Rs 5 lakh for the deceased, also the government will pay for treatment charges and ordered the Director General of Police to investigate further and report the matter immediately.

Chief minister HD Kumaraswamy has announced Rs 5 lakh as compensation to the families of the deceased in the Chamrajanagar food poisoning incident.
The CM held a meeting to discuss the accident that took place at Sulvadi village.

CM has announced that the Govt will bear the medical expenses of all those affected in the food poisoning incident. He also ordered the Director General of Police to investigate further & report the matter immediately.

Chief minister HD Kumaraswamy visited the K.R. Hospital, Mysuru, where the injured from the Chamarajanagar food poisoning incident is being treated. He consoled the victims of the tragedy, in which 8 people were dead and several others were taken ill. #Chamarajanagar pic.twitter.com/ZsYyhLckJr

Kumaraswamy described the incident as unfortunate stating that, "there is an unfortunate food poisoning incident in Kamgere village. Principal Secretary and the commissioner has instructed DHOs Mandya and Mysore to provide help to Chamrajnagar health administration."

"The concerned program officer is monitoring calls at 108 call centre and coordinating services of ambulances. Commissioner has instructed ADC Mysore to provide services of private ALP ambulances. 2 senior officers are on way from state HQ to coordinate and supervise activities," Kumaraswamy added.