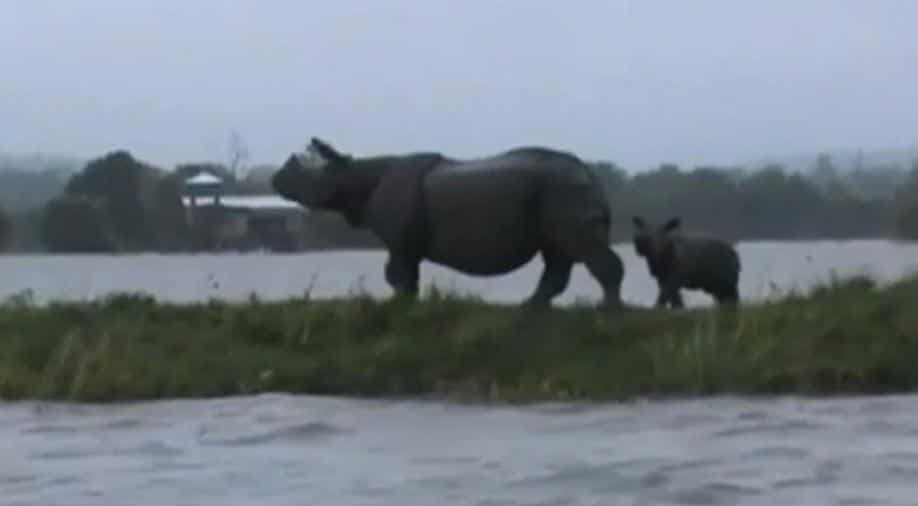 Both the sanctuaries have been battling the mayhem unleashed by floods in the state. Almost 95 per cent of the Kaziranga park was flooded due to incessant rains.

The water level at flood-hit Pobitora Wildlife Sanctuary and Kaziranga National Park has started receding with the sustained efforts of the forest department to provide relief to the animals residing there.

"We have put in a lot of efforts to provide immediate relief to animals residing in these sanctuaries. The water level has started receding slowly. We have been carrying fodder and grass in boats for rhinos. There are 12 rhinos in Pobitora," a forest guard said.

Both the sanctuaries have been battling the mayhem unleashed by floods in the state. Almost 95 per cent of the Kaziranga park was flooded due to incessant rains.

On July 22, Environment Minister Parimal Shukla had said about 162 wild animals have lost their lives in the floods.

"About 12 rhinos lost their lives out of which three were adults. Apart from this, eight lion cubs died. Other animals that died in floods were bears, buffalos, etc," he said.

The Rhino Protection Force was deployed in the national park to monitor the situation at the National Highway 37, which is used by the animals to reach highland.

Meanwhile, flood-affected people of Bandhara village in Bongaigaon district have installed makeshift houses on a bridge as their residences have completely submerged in water.

According to them, around 100 houses were destroyed in floods. "It has been around 1.5 months here. We are getting ration and medical treatment. But employment and education have been affected adversely," they said.

As of July 31, a total of 12 districts and 26 revenue circles of Assam are reeling under floods.

Several rivers are flowing above the danger mark like the Brahmaputra river at Neamatighat in Jorhat and Dhubri, Jia Bharali in Sonitpur district, Puthimari in Kamrup district and Beki and Kushiara rivers in Barpeta and Karimganj districts, respectively.