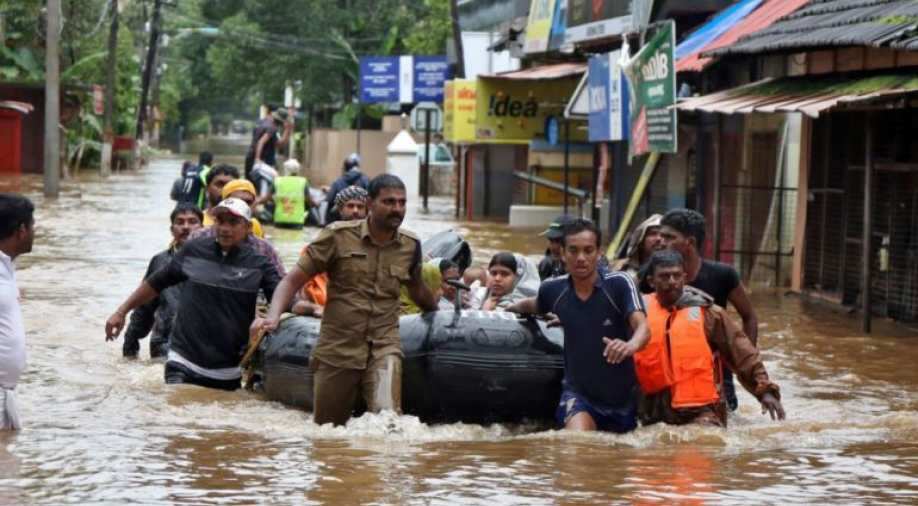 Rescuers evacuate people from a flooded area to a safer place in Aluva in Kerala, India, August 18, 2018. Photograph:( Reuters )

The Army would continue to be engaged in the rescue operations in flood-hit Kerala till the situation stabilised, Southern Command chief Lt Gen DR Soni said on Monday.

He also said the Army's medical teams would extend the first line of relief in co-ordination with the government.

"There are inaccessible areas and our men will continue to reach out to people who needed to be rescued," he told reporters.

Noting that it was not possible to provide the exact number of people stranded, he said the rescue operations by the Army had not been called off.

He was replying to a question on the number of people still stranded in the state, ravaged by floods.

At a point of time, the army personnel had to return to the barracks, but "We are not in a hurry to do so until things stabilise," he said.

The Army has deployed 1,500 personnel including engineers and divers, for the rescue operation, the Lt Gen said adding it would provide initial relief to the people hit by floods.

"We do the rescue work and initial relief work. We have got a large number of medical personnel from the Southern Command," he said.

Dwelling on the role of Army personnel in the current operations in the state, ravaged by landslides and floods, Soni said: "We have saved people from tough areas".

"They (medical team) are here. I know there are hospitals here, the but the first relief will be given by our people which will be co-ordinated by the government departments," he said.

As a precautionary measure, Soni said, the Southern Command was working out a plan to make sure that equipment required to meet flood situations would be stationed in the region.

"I want to make sure in the next two-three months, this is centrally located in the region, so that long and large scale movement are not resorted to at a time of calamity. We will be prepared...I promise," the Lt General said.

He said the Army had brought 25 boats from Jodhpur, 15 from Bhopal and many other relief equipment from Pune and Bengaluru.