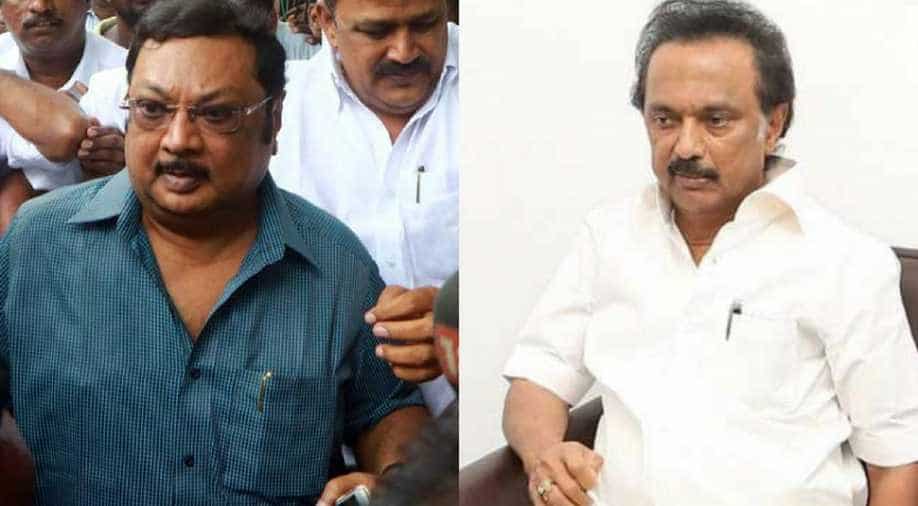 A week after the death of former DMK chief M Karunanidhi, the family feud between his sons has again come out in open.

Karunanidhi's elder son MK Alagiri on Monday stood on the spot where his father lies buried and addressed the media claiming that he had the real support of the party members.

Addressing the media he said, "My father's true relatives are all are on my side. All the supporters in Tamil Nadu are on my side and are encouraging me only. Only time will give the answers...that is all I am willing to say now".

My father's true relatives are all are on my side. All the supporters in Tamil Nadu are on my side & are encouraging me only. Only time will give the answers...that is all I am willing to say now: MK Alagiri, late DMK Chief M #Karunanidhi's son, in Chennai #TamilNadu pic.twitter.com/3dAWMV0a6V

Alagiri, 67, is two years older to Stalin. Karunanidhi had expelled him from the party in 2014 for anti-party activities.

Thereafter the former DMK chief had also appointed his younger son MK Stalin as his heir.

Stalin was made the working president of the party in January 2017 after Karunanidhi's health deteriorated.

Alagiri seems to assert his claim over the party after the demise of his father. His support base primarily stems from southern part of Tamil Nadu.

His supposed stake claiming over DMK's leadership comes a day before the party's top brass meeting in Chennai on Tuesday.

A Dravida Munnetra Kazhagam (DMK) executive committee meeting is scheduled to be held tomorrow to condole the death of Karunanidhi.

The meeting will also announce the date on which the party will officially elect MK Stalin as the new president.

He may not be able to split the party but he can do significant damage to the DMK during next year's Lok Sabha elections.

After Jayalaitha and Karunanidhi's passing away, a political vacuum exists in Tamil Nadu.

Two famous film stars Kamal Hassan and Rajinikanth are already in the political fray who have the capacity to dislodge traditional parties like the DMK and AIADMK.

Even during RK Nagar bypoll, DMK came third. It has not been able to recover after 2014 Lok Sabha elections. DMK also lost to Jayalalithaa's party in 2016.

It can be a tough road ahead of Stalin as for the first time in 50 years, the first generation of Tamil politicians are absent from the scene.