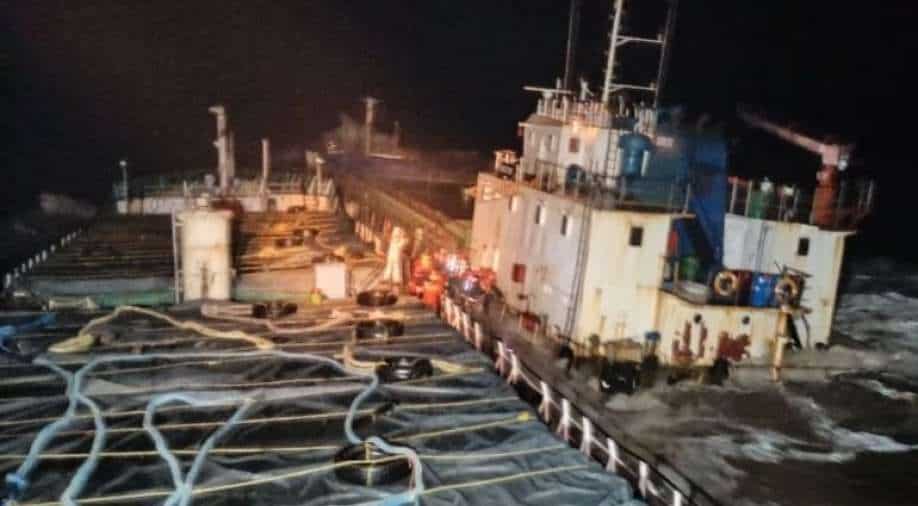 The Maritime Rescue Coordination Centre (MRCC) of ICG in Mumbai received information on Wednesday noon, regarding the cargo ship MV Kanchan that was stranded off Umargam in Gujarat.

The Indian Coast Guard (ICG) has said that all the 12 crew members of the cargo ship MV Kanchan, which sank off Gujarat, have been rescued.

The ship had been dead in the water after contamination in the fuel left its engine defunct and the vessel without power supply.

The weather in the region was inclement, with gusty winds of over 50 knots and waves that were 3-3.5 metres high. As of Thursday morning, it was learnt that the vessel had sunken.

The Maritime Rescue Coordination Centre (MRCC) of ICG in Mumbai received information on Wednesday noon, regarding the cargo ship MV Kanchan that was stranded off Umargam in Gujarat.

Later in the evening, the master of MV Kanchan informed us that their vessel, which was ferrying steel coils, had dropped its anchor and was listing towards its starboard side (right side).

MRCC Mumbai instantly activated the International Safety Net (ISN) to identify all the vessels in the vicinity to assist MV Kanchan.

The MV Hermeez, which was in the region, responded quickly and diverted towards the vessel amid rough seas and conducted a daring rescue and evacuation at night.

The ETV Water Lily that was deployed by Directorate General Shipping to assist the stranded vessel has also reached the area. In addition, two tugs have also been deployed by the vessel owners, which are also likely to reach by Thursday noon.

The stranded vessel was not seen during searches at its last known location, conducted by ETV Water Lily and a helicopter from Daman.

Minor oil sheen and debris were sighted by the helicopter. DG Shipping has issued a notice under Sec 356 J to the Master and Owner of MV Kanchan for the prevention of oil pollution in the area.