After Libya, Iraq & Syria, US is coming after us: Venezuela ambassador Augusto Montiel 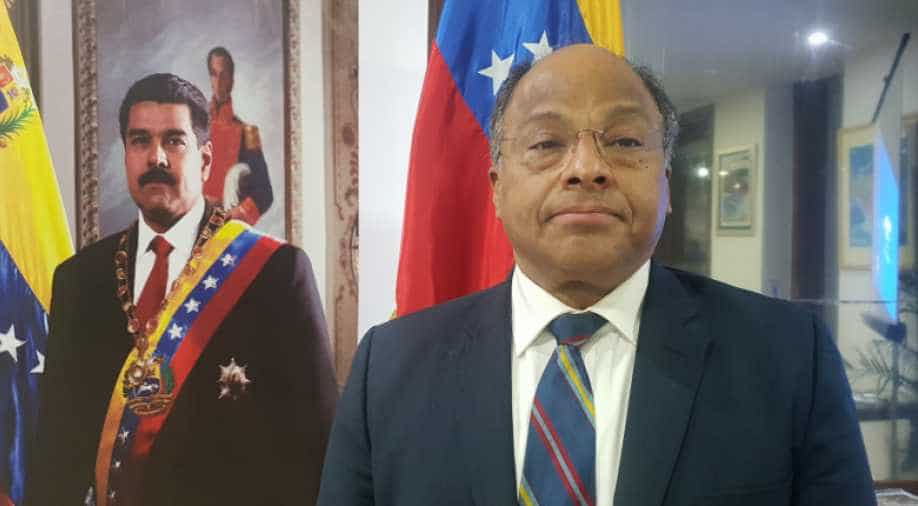 Maduro is pushing for rule of law and democracy in every country, Venezuela's ambassador to India Augusto Montiel said.

Venezuela is in the grip of a major crisis. It currently has two presidents. President Nicolas Maduro who was elected last year, and opposition leader Juan Guaidó who declared himself as the president. The world stands divided with United States and many European leaders recognising Guaido while Russia and other countries backing Maduro. In an exclusive conversation with our diplomatic correspondent Sidhant Sibal, Venezuela's ambassador to India Augusto Montiel spoke on the current situation in the country.

WION: How do you see the situation in your country?

Augusto Montiel: Very clearly its a coup which has been organised and financed by the government of United States. The truth about Venezuela has not been shown.

Millions of people are supporting President Nicolas Maduro, they are supporting the constitution of Venezuela, the institutions, but the international organisations are not showing it.

There is a coup of international proportions led by the government of US. No article of the constitution allows anyone to come up and become a president without the vote of Venezuelans. President Nicolas Maduro was elected in May 2018 and like always the US government did not recognise the elections. It only recognises the elections in which the opposition wins. President Maduro has 6 million votes and that should be respected.

WION: What is the rationale of US interference?

WION: European countries have given a deadline for election...

Augusto Montiel: Looks like we are going back to the imperial or colonial time when the big empires ruled. What is civilization for? What is the United Nations for? The advancement in civilisation is for dialogue and negotiation. The US government is now pushing, financing and equipping a different scenario - a second reality. This reality is fake news reality. The problems in Venezuela is for Venezuelans to solve. We can't accept any power to come just because they have military power. The economic sanctions have created misery.

WION: The US is hinting at a military intervention...

Augusto Montiel: Obviously, its a crime. They can exterminate any country. They have sufficient bombs. Whatever they doing is against the logic of co-existence and human rule of law because of greed for Venezuelan oil. We will defend it. After destroying Libya, Iraq, Syria, what they want is to create a situation of terror in Venezuela. These are imperial desires of the US government.

WION: How do you see India's reaction?

Augusto Montiel: New Delhi has clearly stated problems of Venezuela and the electoral and democratic situation must be solved by Venezuelans and not by anyone coming from outside by a foreign country, by military power exerting and giving instructions and dictating politicians who do not want freedom and independence of Venezuela.

India has stated also, anything that happens there must not include violence, must not include war. Venezuela is a country that likes and bases its international relations on diplomacy of peace. We are there to share our oil on the basis of fair trade, on the basis of cooperation and friendship. We will make sure democracy and international cooperation prevails. This is what multilateralism is about.

We don't want the government of the United States to try to destroy multilateral environment which is keeping the world at balance. We can't lose that balance. Maduro is pushing for rule of law and democracy in every country.