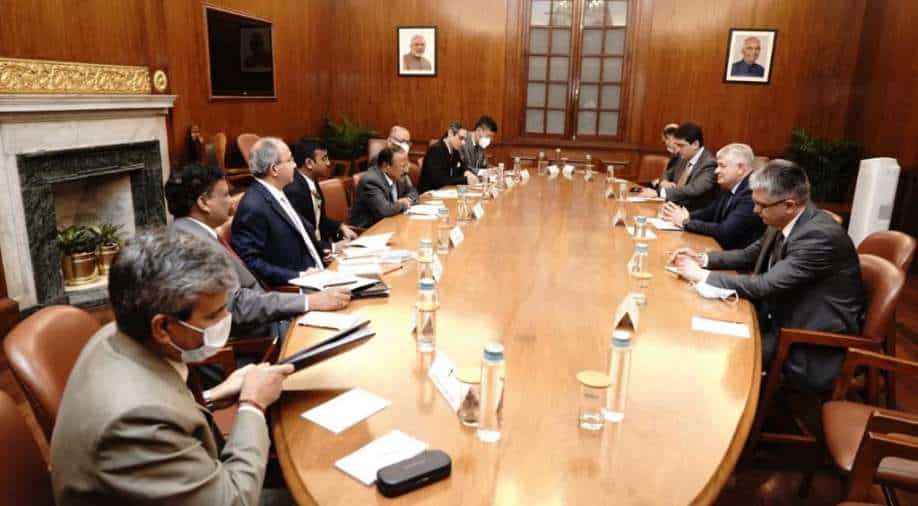 With the onset of winter, a major humanitarian crisis looms over Afghanistan with the country reportedly on the brink of starvation.

The bilateral talks came a day before the Delhi regional dialogue that will take place between the NSA of five central Asian countries including Russia and Iran. With the onset of winter, a major humanitarian crisis looms over Afghanistan with the country reportedly on the brink of starvation.

During the discussion, the Indian and Tajikistan's secretary, security council Nasrullo Rahmatjon Mahmudzoda discussed the humanitarian crisis and exchanged assessments on the Taliban's takeover in Afghanistan. Both sides "expressed concerns over the sharp increase in terrorist threats from Afghanistan in recent past", sources said.

Tajikistan has been one of the first countries to point out the lack of Tajik representation in the government announced by the Taliban. Tajiks constitute a significant minority in Afghanistan and in the past have been part of the Northern Alliance which opposed the Taliban.

Tajikistan, which shares a land border with Afghanistan has deep linkages with the country's Tajik minorities. Earlier this year, Tajikistan had honoured Northern Alliance leader Ahmad Shah Massoud with its highest honour - the Order of Ismoili Somoni. It also conferred the same honour on Afghanistan’s former president-in-exile Burhanuddin Rabbani.

Both sides are also keen on deepening cooperation in areas like defence, border management and border infrastructure development. In the aftermath of the Taliban takeover, Tajikistan had provided its airbase for the Indian Air force planes which were deployed for evacuation. India began its first overseas airbase in Tajikistan's Ayni.

India's NSA also conducted a bilateral meeting with Uzbekistan's Secretary of the Security Council Victor Makhmudov. Sources highlighted both felt that the "legitimacy of any Afghan government within Afghanistan was important before the issue of its international recognition". Taliban since its takeover in August has announced a government but no country including its allies Pakistan and China have recognised it.

Uzbekistan also shares a land border with Afghanistan and is worried about a possible spillover into the country, especially emboldening "hotheads" involved in radicalisation. The country has been keen on connectivity links, especially with cites like Mazar-e-Sharif in north Afghanistan.

On the issue of humanitarian access, both sides," emphasised the need for Afghanistan’s neighbours to ensure unhindered access of humanitarian assistance to the people of Afghanistan." India has been keen to send aid to Afghanistan, however, Pakistan has not allowed it via the Wagha border.