Every moment of my life, every fibre of my being is devoted to nation: PM Modi in victory speech 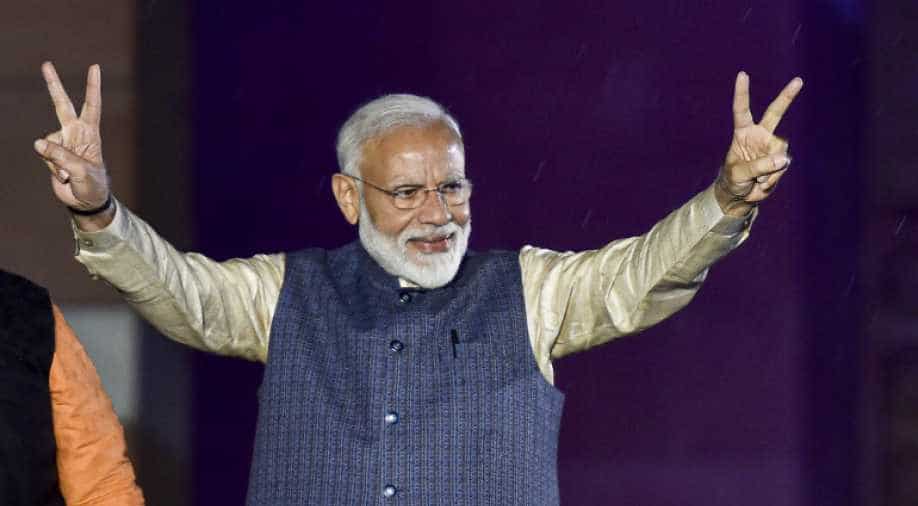 As Modi walked into the party headquarters, alongside Shah, he bore a look of jubilation and flashed victory sign while party workers and supporters strew flower-petals on him.

Prime Minister Narendra Modi on Thursday evening arrived at the Bharatiya Janata Party headquarters in New Delhi and gave his first address after the party seemed poised to register a landslide win in Lok Sabha polls 2019.

The prime minister promised to devote "every moment" of his life and "every fibre" of his being for the people of India.

"This is a mandate to form new India," PM Modi said in his victory speech.

"After so many elections, this is for the first time when so many votes were cast, that too amid sweltering heat," the prime minister noted.

PM Narendra Modi: Since the country got independence, so many elections took place, but the maximum voting took place in this election, & that too in 40-42 degree temperature pic.twitter.com/fTTy4PjVQq

"I would like to thank 130 crore citizens of the country," PM Modi said. "Even the God of rain is here to celebrate with us in our win," he added.

"The country will now have only two castes - the poor and those who want to alleviate poverty," he said.

As Modi walked into the party headquarters, alongside Shah, he bore a look of jubilation and flashed victory sign while party workers and supporters strew flower-petals on him.

Party president Amit Shah thanked the electors and the party workers. "This is the victory of Prime Ministers's popularity," Shah said.

"This was a historic win, after 50 years a leader a managed to register full majority to form the government," Shah added.

Earlier in the day, Prime Minister Narendra Modi thanked the electors for placing trust in the party once again.

"Thank you India! The faith placed in our alliance is humbling and gives us the strength to work even harder to fulfil people's aspirations," the prime minister tweeted.

"I salute every BJP Karyakarta for their determination, perseverance and hard work. They went home to home, elaborating on our development agenda," his tweet read.

Prime Minister Narendra Modi led-BJP appeared set for a resounding comeback on Thursday with leads over 300 seats while the Congress trailed far behind with 90, as the counting of the votes polled in India's 17th Lok Sabha election was underway.

Wishes began pouring in earlier in the day for the PM Modi and the BJP as the party, along with allies maintained leads on over 280 Parliamentary seats as the counting of votes progressed today.

Later in the day, the leads for the NDA shot up on over 340 seats, unofficially pronouncing another term for PM Modi.