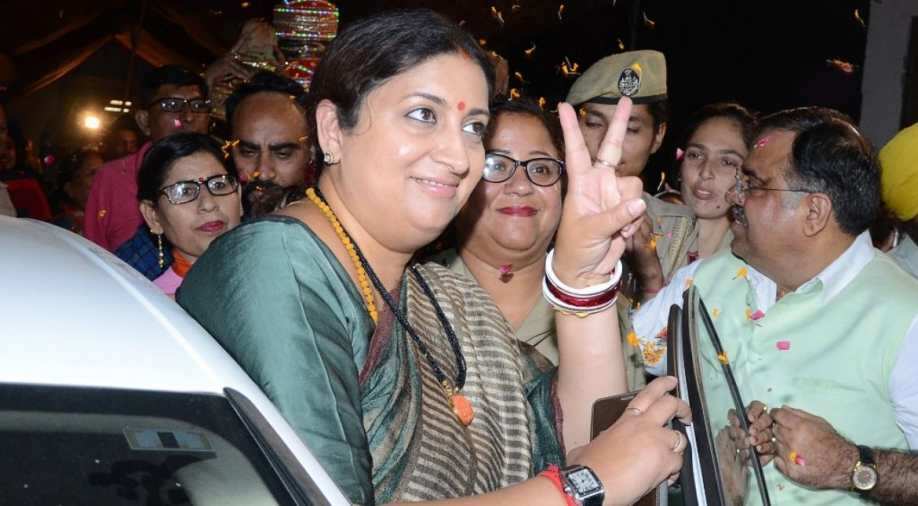 Irani had cultivated a strong voter base in the constituency with her numerous visits and using central development schemes in past five years.

BJP leader Smriti Irani, who defeated Congress president Rahul Gandhi in Amethi, thanked the people of her constituency in a tweet on Friday morning.

"It's a new morning for Amethi, a new resolve. Thank you Amethi. You placed your trust in development and helped lotus bloom. Grateful for that," Irani said in her tweet in Hindi.

Irani defeated the sitting Amethi MP Rahul Gandhi by a margin of 55,120 votes, uprooting the Congress president from his family bastion. In the 2014 Lok Sabha elections, Gandhi had defeated Irani by 1,07,903 votes.

Irani had cultivated a strong voter base in the constituency with her numerous visits and using central development schemes in past five years which helped her inn reversal of fortune.

She shared a silhouette picture of a direwolf on the backdrop of the moon with a quote from popular TV series Game of Thrones "The North Remembers" on her Instagram account.

Acknowledging Smriti's win in the North and adding that there is love from the South too, an Instagram user commented, "Don't worry mam there is love from south kerala too just that we need better speakers communicators and planing in kerala we tried our best but not enough follow up or action was there suresh ji kumanam ji and k surendran ji are awsome candidates who if there was proper planing and time with resources could have yielded results."

Soon after Gandhi conceded defeat and congratulated her on Thursday, Irani tweeted a line out of Hindi poet Dushyant Kumar. "Kaun kehta hai aasmaan mein suraakh nahin ho sakata", she tweeted. It translates to mean "Nothing is impossible."

From featuring in one of the most watched soap operas in Indian history, to tirelessly campaigning through the streets of Amethi, it was a long journey for the actor-turned-politician. Needless to say, she has owned every bit of the success she has tasted.

At the national level, BJP whose campaign was spearheaded by Prime Minister Narendra Modi on nationalism and a strident anti-Congress plank, has won 303 seats and is leading on 15 as per the latest details updated on the website of the Election Commission.