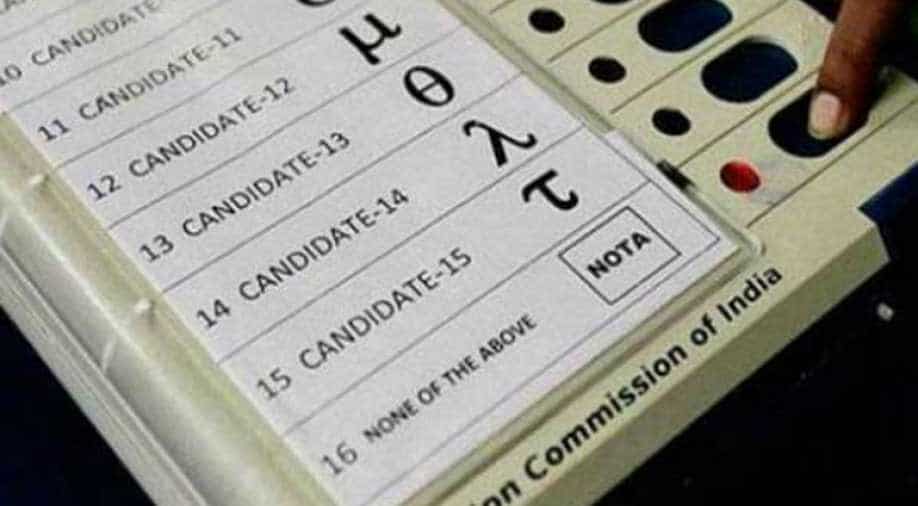 As many as 2,373 voters from the constituency did not want to vote for anyone and pressed the EVM button for the None of the Above (NOTA) option. Photograph:( ANI )

According to the Election Commission's website, the NOTA vote share of Bihar stood at two per cent of the total votes polled in the state that has 40 Lok Sabha seats.

Bihar saw about 8.17 lakh voters opting for the None of The Above (NOTA) option - the highest in the country - while exercising their franchise in the 17th Lok Sabha polls.

According to the Election Commission's website, the NOTA vote share of Bihar stood at two per cent of the total votes polled in the state that has 40 Lok Sabha seats.

NOTA, which was introduced in India following a 2013 Supreme Court directive, allows voters to express their dissent by pressing a button saying none of the contestants is worthy of their vote.

In 2014 Lok Sabha polls, where it was introduced for the first time in any parliamentary election, around 60 lakh voters had opted for the NOTA option -- equalling about 1.1 per cent of the total votes polled during those elections across 543 seats.

In the 2019 elections, the constituency of Gopalganj in Bihar saw 51,660 voters pressing the NOTA button (5.04 per cent), the highest in the country.
Other constituencies in the state like Paschim Champaran (4.51 per cent), Nawada (3.73 per cent) and Jahanabad (3.37 per cent) also saw many voters opting for NOTA.

While counting of votes continued till late night on Thursday, by evening, it was clear that the Bharatiya Janata Party had sealed electoral victory with a 300-plus win. The party secured 302 of the 542 seats, while Indian National Congress had 52 seats. Results from Arunachal Pradesh West constituency are yet to be announced.

In the key constituency of Varanasi, the seat from where Prime Minister Narendra Modi contested the elections and won, saw 4,037 voters (0.38 per cent) opting for NOTA.

The constituency of Kerala's Wayanad, where the Congress scion Rahul Gandhi won from, saw 2,155 voters (0.2 per cent) pressing the NOTA button.